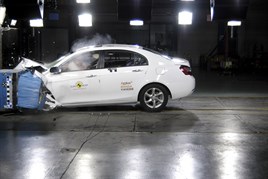 Ten new models have achieved the top five star Euro NCAP safety rating in the last round of tests for this year.

Two Chinese newcomers, the Geely Emgrand EC7 and MG6 achieved four stars which Euro NCAP said was a credible result which underlined the manufacturers’ desire to improve the safety record of Chinese brands in Europe.

“It is a clear sign that Chinese carmakers are building on recent experiences and rapidly investing in better vehicle safety. Even with the upcoming increased demands, five stars are expected to be within reach soon.”

This result puts it on a par with the Mitsubishi i-Miev, but behind other EVs such as Nissan Leaf and Opel Ampera tested earlier in the year.

The Fiat Panda lost a star as it is not fitted with ESC as standard, despite the technology becoming mandatory in 2012.

By contrast, VW ensured very high standard availability of ESC on the Up, securing a five star rating for that car and its cousins, the Seat Mii and the Skoda Citigo.

The Jeep Grand Cherokee showed disappointing results in child occupant protection. In the frontal impact, the seat rail holding the seat belt anchorage came close to breaking in two, resulting in contact, through the fabric of the airbag, of the driver’s head with the steering wheel rim.

Euro NCAP has urged Jeep to complete its investigation into the cause and implement an improved seat rail design in future production cars soon.

As part of Euro NCAP Advanced’s mission to reward advanced systems, the safety organization has assessed a number of new technologies offered on recently tested models.

Finally, top scorers VW Beetle and Subaru XV achieved impressive results in child occupant protection, both reaching 90%, which is the maximum score Euro NCAP has yet given for this assessment.

It is also the first time Euro NCAP rewards a fully automatic passenger airbag activation system, where the front passenger of the Subaru XV is only activated when an occupant of a suitable size is detected in the seat, effectively minimizing the risk for younger children seated on that position.

View the Euro NCAP Advanced video for the maufacturers that were rewarded for pioneering new safety technology below. You can view more video content on AM TV.