When is a target not a target? Most people are aware that the EU has set manufacturers a target of 130g/km of CO2 by 2012, otherwise they will be fined.

Now that the CO2 figures for 2010 have come in, one might expect to see manufacturers’ CO2 figures gliding down towards the target figure.

Not a bit of it – some manufacturers are yet to enter the field next to the ballpark, let alone actually reach the target.

According to figures from www.cleangreencars.co.uk, the overall figure for CO2 emissions in 2010 was 144.4g/km, with some big manufacturers closer to 200g/km.

Are they worried about the potentially huge fines? Not really.

Thanks to careful lobbying, the “target” only has to be met by 65% of the manufacturer’s range in 2012, so the most polluting 35% of cars are ignored.

Hence, the overall CO2 figure according to the EU for 2010 was actually 126.9g/km, given that only 65% of cars are taken into account. Hey presto, the target has been reached.

It is no wonder that official statistics are held in such low regard.

Rather than saying the target for 2012 is 140g/km across the industry – effectively what it is – they trumpet to the world how they are getting tough with a 130g/km target in 2012, and then whisper to the car industry, “Not really, we’ll give you an extra allowance until 2015, don’t you worry”.

So are there any manufacturers that could still face a fine in 2012?

To be in that position, a car manufacturer would have to be well above even their more generous target. Incidentally each manufacturer has an individual target based on the average weight of their vehicles, generally in the range of 120 g/km (eg Citroën) and 140 g/km (eg BMW).

The car company which has the most work to do is Mercedes, which is a whopping 14g/km above its 2012 target of 142.2 g/km, even after excluding the worst 35% of cars in its range.

If companies such as BMW (almost certainly) and Toyota (definitely) can meet the target on 100% of their range by 2012, it does raise the question of why the EU softened the rules to ignore the 35% of worst-polluting cars.

At this rate, only the class dunce may be penalised, while those that make some sort of effort will get the reward of EU certification.

It’s like a school where everyone passes an exam, but only because the pass mark has been lowered by one-third. 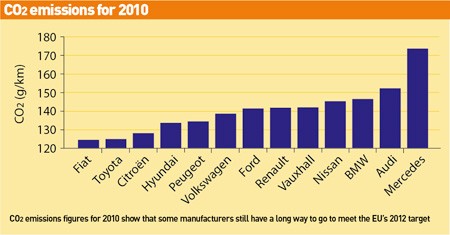