> To view August registration and year-to-date stats from the SMMT click here.

New car registrations rose in August for the first time since June 2010, according to figures released today by the Society of Motor Manufacturers and Traders.

Notably the total reflects a recovery in the private sector, which grew 10.7% in August, again the first rise since June 2010.

The fleet market continued to grow in August and is up by 3.3% in the first eight months of the year.

The August 2010 market was the lowest on record and the 2011 figure was still more than 20% below the 199-2010 average for the month. The SMMT gave the good news a cautious response.

“The September new car market is always important for the UK motor industry, accounting for around 17% of the full year’s registrations.

“Consumers are nervous about the future, but with industry offering unprecedented improvements in fuel economy, competitive finance offers and a wide variety of new models, buyers will find there is something to suit every taste and pocket.”

“Although it is positive to see a rise in new car sales in August, the overall market remains challenging and consumer confidence remains fragile.” said Sue Robinson, director of the Retail Motor Industry Federation’s National Franchised Dealers Association (NFDA) which represents franchised car and commercial vehicle retailers across the UK.

“NFDA members are reporting that new cars will sell if there are deals available and the purchase looks attractive.

“Consumers are still nervous about purchasing big ticket items but while interest rates remain low some consumers do have disposable income to spare.

“They are becoming aware that downsizing to a new smaller vehicle may actually save them money in ownership and running costs.

“Our members are aware that the sales process within their businesses must make the consumer feel at ease to raise their confidence in buying a new car.”

The Ford Fiesta was again the best-selling model in the overall new car market in both August and the year-to-date.

> Further analysis of the market performance will be in our September ezine, AMe, which will be published tomorrow. If you would like to receive a copy each month register here. 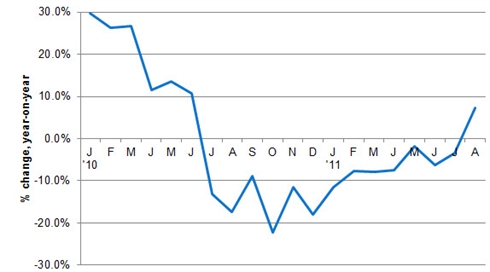 AM Poll
What is your take on the car retail sector's ongoing vehicle supply shortages? Please leave a comment
Vote
View all
3612