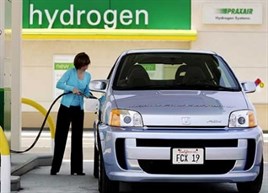 The group will evaluate the potential for hydrogen as a fuel for ultra-low carbon vehicles in the UK before developing an action plan for an anticipated roll-out to consumers in 2014/15.

The group plans to analyse in detail the specific UK case for the introduction of hydrogen fuel cell electric vehicles as one of a number of solutions to decarbonise road transport and quantify the potential emissions benefits.

It will also review the investments required to commercialise the technology, including refuelling infrastructure; and identify what is required to make the UK a leading global player in hydrogen fuel cell electric vehicle manufacturing.

Prisk said: “The UK is proving itself to be a key early market for ultra-low emission vehicles with growing numbers of electric and plug-in hybrids appearing on our roads.

“The Government is supporting this market by investing £400million to support the development, demonstration and deployment of low and ultra-low emission vehicles.

“Hydrogen fuel cell electric vehicles are increasingly being recognised as one of the viable options as we move to a lower carbon motoring future. They are highly efficient, can be fuelled in minutes, travel an equivalent range to a conventional combustion engine, and have zero tail-pipe emissions.

“The UK has a number of world-class companies that are developing exciting technologies in both the hydrogen energy and automotive value chains and it is therefore vitally important that we identify what is required to make these cars a realistic proposition for UK consumers.”

“Its job is to roll its sleeves up and ensure that the UK is well positioned for the commercial roll-out of hydrogen fuel cell vehicles from 2014/15 as part of a balanced portfolio of drivetrains.

“Fuel cell vehicles, storage and refuelling technology are here today, they work. We now need to look at how we can make these elements, together with the hydrogen refuelling infrastructure, work most effectively to enable the UK to take full advantage of hydrogen as a transport fuel; stimulating inward investment, GDP growth and securing and creating new jobs”.

UKH2Mobility will deliver its evaluation of the potential of hydrogen as a transport fuel by the end of 2012. If the results are positive, an action plan will be developed to work through the steps needed to get the UK ready to be one of the first markets for the global commercial roll out of hydrogen fuel cell electric vehicles.