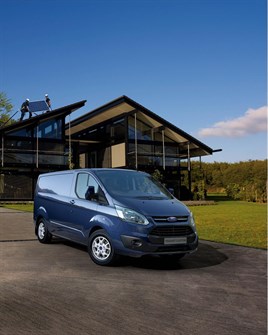 The all-new Ford Transit Custom makes its global debut at the Birmingham CV Show, which Ford says will bring new levels of style, driver appeal and functionality to the one-tonne commercial vehicle market.

The Ford Transit Custom is targeting an expanded share of the segment, appealing to a broad range of professionals, skilled tradesmen and small businesses.

With a full range of van, kombi, and double-cab-in-van models, the new Transit Custom will go on sale later in 2012 in Europe as well as other global markets, except North America.

In addition to offering maximum load volume of 6.0 cubic metres SAE with full bulkhead fitted, the load area of the Transit Custom has been carefully optimised to offer more space and more convenience than any of its rivals.

Key features and innovations include:

¦Optimised bulkhead and loadspace design enables SWB model to carry three Euro pallets loaded to at least one metre high
¦Load-through hatch in bulkhead enables loads up to three metres in length, such as pipes or ladders, to be safely carried inside the vehicle
¦Class-leading width between wheelarches allows wide loads, such as 8 feet x 4 feet (2440mm x 1220mm) boards to be easily accommodated flat on the floor (or stored vertically if required)
¦Class-leading height and width of sliding side load doors for ease of loading
¦Deployable integrated roof rack system seamlessly integrated into the roof, and can be deployed when required. When not in use, the cross bars can be quickly folded down, reducing drag and fuel consumption, as well as keeping the vehicle height under two metres (with the exception of the 330 series)
¦Repositioned tie-down hooks and fixing points located on the body sides, leaving the floor clear for easier loading and cleaning
¦Easy clean load floor liner offers enhanced durability and simple cleaning

Ford will be presenting larger and higher payload Transits later in 2012. These models will be extensively sold on a global basis, including North America, and will also feature rear-wheel-drive.

Production of the new Transit Custom will start from mid-2012 at Ford’s plant in Kocaeli, Turkey, with market availability later in the year.