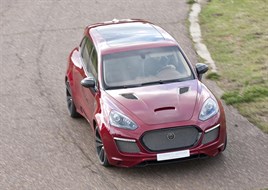 Eterniti Motors, the London-based tuning company, has revealed a prototype of its Artemis “super SUV” which will go on sale in the UK in autumn priced at approximately £252,000.

The new model is based on a Porsche Cayenne, but carries a £165,000 price premium over the German model and features a 4.8-litre twin-turbocharged V8 engine which has been tweaked to offer 591bhp, hitting 0-62mph in 4.2 seconds.

Eterniti believes the Artemis will beat other luxury SUVs to market like the Bentley EXP 9F concept, Maserati Kubang and Lamborghini Ursus.

The British company is still establishing a network of wholly-owned showrooms in key markets across the globe.

Its London headquarters also has an atelier and a build facility where vehicles can be created and hand-built on-site. The facilities will be completed by July, followed later in the year by Eterniti-owned showrooms in Taipei and Hong Kong, which will serve as the company’s Asia-Pacific hub, with Tokyo following next year. The company is actively looking for retail partners to develop representation in China during 2013.

Cars will be covered by a full two-year, 100,000-mile warranty including servicing, and UK customers will have access to finance and insurance.