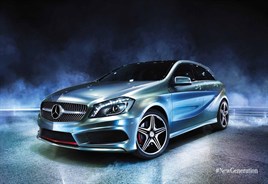 Mercedes-Benz UK has started its marketing campaign for its new A-Class with a non-branded advert.

The campaign has been designed to “entice the audience to discover more using Twitter” and just features an image of the new A-Class and one line #NewGeneration.

A 10 second television advert aired during the England versus Norway football match on May 26.

Mercedes has also launched an email campaign and online advertising to promote the new model which will play a key role in opening up the brand to a younger audience.

David George, Mercedes-Benz Passenger Cars marketing director, said: “The A-Class is a real game-changer for the brand. The Pure and Simple campaign is designed to raise awareness of the new generation for Mercedes-Benz and is the beginning of a major launch for this exciting new vehicle.”

Mercedes-Benz will also be running a homepage takeover of Spotify.com, encouraging users of the free account to choose the song they would use for the new A-Class advert and tweet their selection to be in with a chance of winning a Spotify Premium membership.