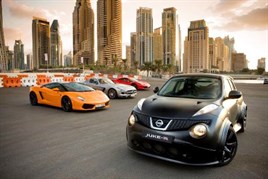 Nissan has announced that its 545bhp Juke-R crossover supercar will be made available to buy in a limited run on build-to-order basis.

The 3.8-litre, 160mph Juke-R made its global debut in Dubai in January this year, attracting enough attention for Nissan to turn it into a production reality.

Nissan has had orders for three cars to be built, with two requests coming from “a high-profile and well-respected member of Dubai society”. There's no official word on how much the Juke-R will cost but it's likely to be over £70,000.

Nissan will build more Juke-Rs upon request and will be taking orders in the coming four weeks, before production starts.

The original Juke-R was based on the MY10 GT-R running gear, but the new productions models will run on the latest running gear from the MY12 GT-R.

“But the reaction we had to the car in Dubai was amazing – people were making offers for the original on the street.

“With such a strong reaction, and with three genuine offers on the table, we decided we had to make the car a reality. We can’t let down enthusiasts who are this keen to add to their collection of cars. The Juke-R has become something of a phenomenon and I’m enormously proud of the impact it has had. There will be more news to come on Juke later in the year.”

Nissan will be marketing the Juke-R further with a new movie called Desert Nemeis which features Nissan’s inaugural GT Academy winner, Lucas Ordonez, as he takes on the world’s best supercars in a Dubai street race.