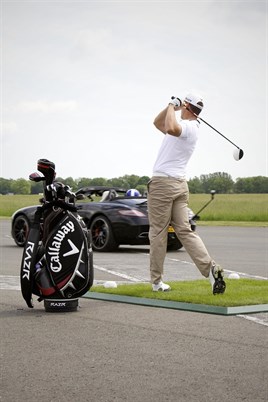 The stunt was captured on film where the SLS AMG caught the ball while doing 120mph 275 metres away from the tee.

The new video fits with Mercedes’ plan to make more of its AMG products and to engage with a younger audience of customers.

Coulthard said: “The only way to track the ball was to keep your eyes on it all the time: it’s a real adrenaline rush but it’s not the most comfortable thing to do because for a moment, you’re not watching the road.”

The stunt was filmed from multiple angles and independently verified by a Guinness World Record adjudicator who confirmed the title of farthest golf shot caught in a moving car.

David George, Mercedes-Benz passenger cars marketing director, said: “The SLS AMG Roadster is an extraordinary car so we wanted to do something extraordinary with it to celebrate our association with the upcoming Open Championship, and what better way than to break a world record and create such an exciting film.”