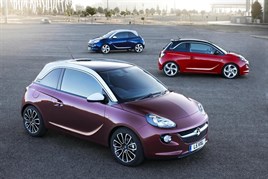 Vauxhall has revealed the first details and images of its new Adam ahead of going on sale January.

The new A-segment model will hope to compete with Citroen’s DS3, Fiat 500 and Mini and Vauxhall is claiming customers will be able to can effectively ‘build’ their own car with over million customisation options.

The Adam will come with LED daytime running lights as an option and customers can choose from three trims, Jam (“fashionable/colourful”), Glam (“elegant/sophisticated”) and Slam (“racy/sporty”).

View all the new images of the Adam in the AM gallery section.

The new model will be available to order after its official premiere at the Paris Motor Show in September, with the first cars reaching UK customers in January 2013.Customers can even choose their headlining, including an LED-lit starlight roof trim. The Adam’s infotainment system will be Bluetooth, Apple iOS and Android compatible and will come with a seven-unch colour touch screen display.

Customers will be offered with a choice of three ecoFLEX four-cylinder petrol engines from launch: a 1.2-litre 68bhp, plus two 1.4-litre engines with either 85bhp or 98bhp. All will be available with optional Start/Stop technology and will be mated to a five-speed manual gearbox.

There will also be the next-generation small petrol engine mated to a six-speed transmission from Vauxhall at a later as yet unspecified date.

Mark Adams, designer of the Adam and Vauxhall/Opel’s vice president of design, said: “No other car in this segment can be individualised as much as Adam because we are offering virtually unlimited exterior/interior colour, fabric and kit combination choices. It’s very unlikely that you’ll find two identical Adams out there.”

The Adam will be the first Vauxhall to have the Advanced Park Assist II system available as an option. The latest generation ESP system is standard on all Adams, including a hill start assist function.

Prices have not been officially confirmed but AM-sister title CAR magazine understands the Adam will kick off from around £9,000 – nearly £3,000 less than a base-spec Mini, and around £1,000 cheaper than a Fiat 500.

Opel/Vauxhall has put out a promotional video which has cropped up on YouTube:

Let us know what you think of the new Adam and its name. Will fashion conscious female customers accept the Adam name and has Vauxhall successfully design the car to tempt people out of their Minis? Use the form below to comment or email am@bauermedia.co.uk