However, each market sector recorded a decrease of just 1%.

The 2% average decrease is due to the shift in mix of sales, with a larger percentage being made up of lower value dealer part exchange vehicles, according to the National Association of Motor Auctions (NAMA) market report for August.

It said the moderate fall in prices in each of the sectors is a "reflection of very stable market conditions between July and August".

Attendance at auctions and trader buyers’ tendency to buy changed very little between the two months and the supply of trade cars
also barely changed.

Tony Gannon, NAMA committee member, said: "Whilst it is traditionally one of the quietest wholesale months of the year, August recorded a strong result for vendors.

"Prices remained stable because of the continuing reduction in the supply of used cars rather than an improvement in trade demand.

Trade buyers have only been purchasing vehicles to fill the spaces that have appeared on their forecourts.

“Dealers retail asking prices have virtually remained unchanged over the summer months therefore there has been no obvious loss of profit margin recorded.”

Price changes in August compared to July, by customer type 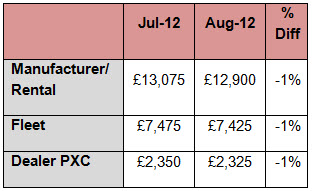 Overall auction sales in August 2011 were 7.3% higher than August 2012, but the percentage of older vehicles sold at auction in August this year has increased significantly.

Furthermore, for every month this year there has been a larger proportion of sales of these vehicles when compared to the same month in 2011.

There has also been a change to the sales mix of cars aged between 2.6 and 3.5 years – typically ex-fleet vehicles. In August 2011 this age of vehicle made up 19.5% of all vehicles sold at auction.

However, in August this year vehicles of this age made up only 15% of sales.

These very significant changes in the age mix of cars helps to explain the apparent disparity in prices. The suggestion would be that reduced supply in the fleet sector has helped to push up prices year-on-year from £6,675 to £7,475, or 10.1%.

Gannon said: “From the beginning of September the market dynamics have begun to change.

As NAMA predicted, the supply from the dealer sector is now on the increase, and as we hoped, trade interest is gaining momentum.

Prices during the first two weeks of September were up 3% from the end of August and it would appear that these positive signs will continue for the next few weeks.

However, we will soon enter the traditional period of uncertainty where supply will continue to increase and it will be uncertain if the market will be able to preserve the higher prices and vendors will need to monitor the market carefully.”