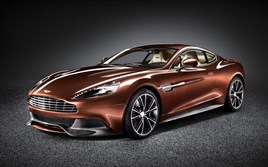 Aston Martin is still the “coolest brand” for car manufacturers in the UK but lost the top spot overall to Apple.

Aston Martin was pushed down into third place by YouTube which came second. Mercedes-Benz was the only other car manufacturer in the top 20 in 16th place.

Maserati and Ferrari were not included in the top 20, but both featured last year.

Mercedes' inclusion in the top 20 is a testament to the work the brand has been doing to improve its image with younger customers.

Rob Halloway, communications director at Mercedes-Benz, said: "I think by its very nature, coolness is in the perception of others. I think that cool things have a certain style, elegance and swagger about them. Cool people possess all these qualities, and cool brands blend a timeless quality with absolute topicality. It sounds like an oxymoron, but that’s what makes cool “cool”. Like style over fashion, cool endures where trendiness tends to be transient.

"The SLS AMG is a new supercar for a new generation, and the A-Class is just as cool, but a lot more attainable. Radically different from its predecessor, the new A-Class has been designed and positioned to be really desirable to customers who previously might not have considered a Mercedes-Benz.

"The Concept Style Coupé gives another hint of what’s coming – and we’ve got lots more “must-have” compact cars on the way.

"We’re backing up everything we’re doing with great products, great people, excellent support of key events, new ways of communicating these cars to new and existing customers – and we’re going to do it in some style.”