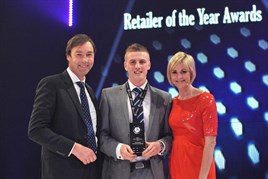 Jim Robertson, market area director, commented: “We are delighted to have been named not only Retailer of the Year, but also Parts and Service Team of the Year.

“It has been a real team effort with a focus on our customers and the service we offer them.

“This is a great boost for the team at the start of what is going to be another busy year with more new products. We look forward to serving our customers, both old and new.”

Other big winners were Listers (sales), dealers based in and around Wolverhampton and Stoke (customer service) and Sytner West (Smart).