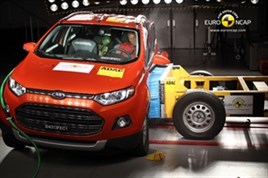 Five out of 11 vehicles in the latest round of Euro NCAP crash tests have missed out on a maximum five-star rating.

Most vehicles involved (across a broad range of categories) are new and being tested for the first time. The Mazda3, Peugeot 308, Ford Tourneo Connect, Infiniti Q50, Maserati Ghibli and Mitsubishi Outlander PHEV (plug-in hybrid) all achieved the maximum rating of five stars.

However, the BMW i3, Ford Ecosport, Nissan Note and Volkswagen T5 (Transporter and Caravelle) all scored four stars. The passenger version of the Mercedes-Benz Citan, tested for the second time after receiving a three-star rating earlier this year was also given four stars.

Euro NCAP said of the safety assist systems on the i3: "A seatbelt reminder is provided for the front seats but not for the rear. A system is available as an option which uses sign recognition to inform the driver of the speed limit. The driver can then set the speed limiter of the car to the appropriate speed. However, the system is not expected to reach Euro NCAP's minimum fitment rate to qualify for assessment."

The Ford Ecosport does not have a speed limiter as standard, while some cars were also penalised for not including rear passenger seatbelt reminders as standard.

Mercedes-Benz worked to improve the safety systems since the Citan Kombi was first tested, including the deployment of the side airbags.