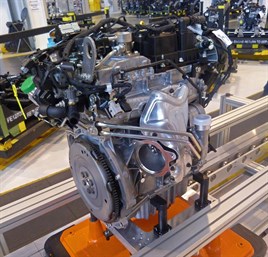 Ford has unveiled a 1.5-litre Ecoboost engine, the latest in its family of efficiency-focused turbocharged petrol powertrains.

The 1.5-litre engine is a key strategic entry for Ford, as the company works to meet the strong global demand for its four-cylinder EcoBoost engines with reduced CO2 emissions and improved fuel efficiency.

Ford says Ecoboost technologies can improve engine efficiency by up to 20%.

Production of the four-cylinder 1.5-litre EcoBoost – the fifth member of the EcoBoost family – will commence initially at Ford’s world-class facility in Craiova, Romania, later this month, with other manufacturing locations to follow.

The engine will be first introduced in the all-new Ford Mondeo, which is expected to launch in Europe during 2014.

The newest EcoBoost engine will be a strategic entry for Ford in global markets that offer tax relief to consumers who purchase vehicles powered by engines of 1.5-litre capacity or less.