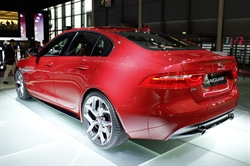 The XE will reach dealers next May, providing a significant volume boost for the Jaguar franchise. Prices will start at £26,995 for the petrol-engined versions and from £29,775 in diesel form.

Topping the range, and available from launch is the XE S, which costs from £44,870 and shares its supercharged 335bhp 3.0-litre V6 with the F-type.

The base 161bhp 2.0-litre diesel offers fuel economy of 75mpg with CO2 emissions of 99g/km in manual form, or 71.7mpg and 104g/km as an automatic, so will have real appeal to the BIK-conscious company car chooser. A 178bhp version of this engine will also be offered.

The car will be offered in four trim levels: SE, Prestige, Portfolio and R-Sport. Standard kit on the SE includes sat-nav, touchscreen with ‘InControl’ multimedia system, DAB radio, 17in alloys and cruise control. SE and mid-range Prestige are only available on the diesels and base petrol model, while Portfolio, the most luxurious, is offered on the diesels and the 237bhp 2.0-litre petrol. R-Sport includes a suspension upgrade and is offered only with the most powerful 178bhp diesel and 237bhp petrol.