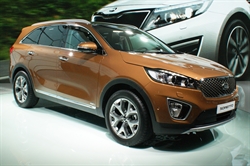 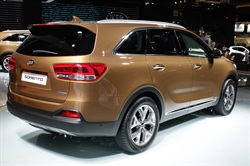 Kia dealers will begin sales of the new Sorento full-size SUV next spring, taking the fight to the Mitsubishi Outlander and Nissan X-Trail. It’s almost 10cm longer than the current Sorento and load capacity with the third-row seats folded flat increases to 605 litres – that’s on a par with a Volkswagen Passat Estate.

Although the roofline is 15mm lower, repositioned seat cushions ensure increased headroom for occupants in all three rows. Kia promises more legroom too. Globally, the new car is available in five- or seven-seat versions, however the UK tends to demand the seven-seater. It’ll have a 2.2-litre turbodiesel under the bonnet. A petrol-electric hybrid version is being developed, but Kia has not yet decided if this will come to the UK.

Interior styling was led by the brand’s European design team, based in Frankfurt, and Kia’s designers have used higher quality materials, with a higher proportion of soft-touch materials and leather. Kia says this is its highest quality interior yet. Buyers, who typically choose the Sorento for its capacity and strong towing ability, can expect a modest price increment over the current range, which starts at almost £27,000.