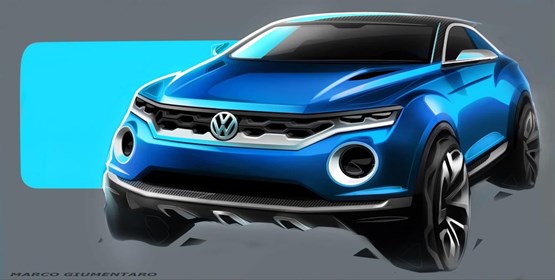 Volkswagen has revealed concept images of its new T-Roc convertible crossover concept which would sit between the Taigun and Tiguan in the German brand’s model range.

VW hasn’t given the T-Roc the green light for production but the design of the concept is likely to influence future VW Group SUVs.

The T-Roc is slightly longer than a Nissan Juke and it also has a much lower and wider stance, taking inspriration, as the name suggests, from VW’s T crossover models and the Scirocco.

The concept comes with a 182bhp 2.0-litre turbodiesel which is the same engine used in the Golf GTD hot hatch.

The T-Roc is built on VW’s MQB platform which has formed the basis of many new Volkswagen Group cars, including the Golf, Seat Leon, Audi A3, Skoda Octavia and the new Audi TT.

Images of the T-Roc will be available in AM’s Geneva Motor Show coverage on March 4.