Is this the most expensive car ever sold in Britain? 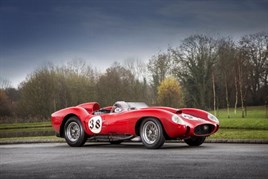 A classic car dealer in Derbyshire is reported to have broken the record for the most expensive car ever sold in Britain after selling a rare Ferrari for a price believed to be in the region of £24 million.

Tom Hartley, based in Overseal, near Swadlincote, has sold the 1957 Ferrari 250 Testa Rossa to an anonymous buyer.

Some reports contain unnamed sources suggesting that the price agreed was £24.1 million, although Tom Hartley Jnr, from the business, would not confirm this.

But if it is true, then the deal eclipses the most expensive car ever sold publicly and tops the £22.5 million paid in 2012 for a Ferrari 250 GTO.

And it would be around three times more than what was paid for a Testa Rossa which was sold in 2009 for around £9 million.

Hartley told the Derby Telegraph that while he could confirm that the car had sold, due to “client confidentiality” he could not disclose the identity of the buyer or confirm the price.

He had tweeted under the hashtag @TomHartleyjnr though: "For those who didn't know we had it in stock, it was the only un-restored Ferrari 250TR, that had been in the Henry Ford Museum for 30 years."

The Testa Rossa sold by the firm has an impressive race history including competing at 12 hours of Sebring while being piloted by legendary American F1 World Champion Phil Hill.

The 12 hours of Sebring is a motorsport endurance race for sports cars held at the Sebring International Raceway in Florida.

It is seen as part of the informal crown of endurance racing which links the three largest sports races.

The Ferrari 250 Testa Rossa, which is Italian for 'red head', is powered by a 3-litre V12 engine which develops 300bhp.

This gives the road-legal race car a 0-60mph time of around six seconds and a top speed of 167mph.