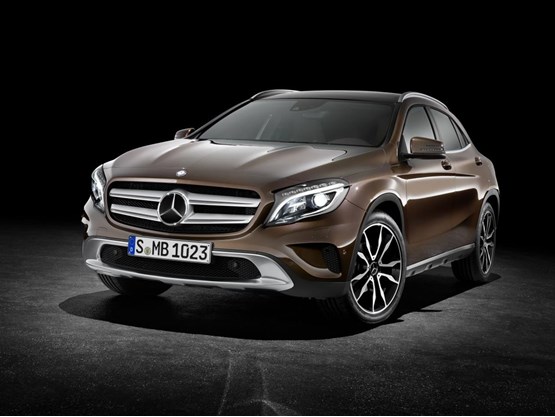 Mercedes-Benz is expecting to double its SUV and crossover sales in the UK in the next 12 months with the arrival of the new GLA.

It is the company's fourth SUV in Britain, joining the M-Class, the GL and the G-Class, which is still going strong after 33 years in production.

But the compact GLA, with a lower start price of £25,850, will lead Mercedes’ SUV sales in the UK.

Mercedes is predicting that 70% of GLA sales in the UK will be of the four-wheel-drive models, in contrast to other compact SUVs, which are largely bought on looks rather than all-wheel-drive capability.

In the UK the GLA is also being ordered as a family car, whereas buyers in other markets are predominantly singles or couples. As a result, Mercedes-Benz UK fits more practical seats than the sports seats standard in other countries, and has made wipe-clean Artico artifical leather the default trim.

So far this year Mercedes has  sold more than 850 versions of the M-Class, almost 150 GLs and 24 G-Class models, all of which are hand-built to order by Steyr in Graz, Austria.

In left-hand-drive markets Mercedes has a fifth SUV, the GLK - a competitor for the Audi Q5 and BMW X3 - but it could not be offered in right-hand drive form without substantial and expensive re-engineering.

However, when the new GLK emerges in 2016 it will be available with right-hand drive.