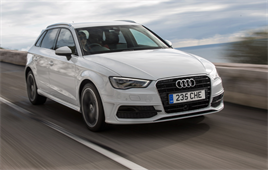 Audi holds four spots in the top 10 fastest selling cars in Britain in a list currently topped by Peugeot's crossover SUV, the 2008, up from seventh place.

The Rover 25 is at number number two.

Rupert Pontin, Glass’s chief car editor, said: “For Audi, this reaffirmation of the brand’s popularity in the used market is very significant, bearing in mind the surge in new registrations over recent years. It shows there is a strong retail demand for the product, which is sure to help with residual values. I think the A1, which has jumped from eighth to fourth, could well be a future number one.”

Of the Rover 25, he said: “It’s cheap and cheerful, and robust in all areas except for the engine. Just make sure the head gasket has been done before you buy, or this car will cost you money.”

At number three, down from the top spot, is the Nissan Qashqai. “Nissan and its Qashqai continue to perform well, consolidating their position as founders of the SUV market for the masses. The recent introduction of a new model will have helped to keep this range in the public eye. Overall, Nissan is now at number two among the manufacturers, with only Ford achieving faster average used car sales.”

Other points of note in the top 10 this month are the appearance of two convertibles and the drop of Hyundai’s i10 from second to 10th place.

Pontin also highlights the Chevrolet Orlando, at number six: “This is a surprise, although it’s fair to say that whilst it’s not a market-leading car it does offer fantastic value for money in a very competitive sector.”

At the bottom of the table is the Mini Paceman, currently taking 96.1 days on average to sell.

The Mini Roadster also finds itself in the bottom 10. “I’m surprised, as Mini is generally a good news brand,” said Pontin.

“It seems that Mini’s venture into a new niche is not being embraced by buyers. I also wonder if there are just too many of these two models in the market right now, and perhaps the residual value expectations of the trade surpass those of the retail buyer.”

There is disappointment for Fiat and Seat too.

“The Fiat 500L is in the bottom 10 as a direct result of an increase in volume in the used car market due to pre-registration and daily rental activity.

"It’s not helped by the fact that there are some fantastic deals currently on new versions, and to top it off the car’s awkward looks have not made it an instant success.

"Looks are a problem for the unloved Seat Toledo as well, which joins Seat’s Mii in the bottom 10. I’m not sure if this reflects general apathy towards the brand or just the availability of better value cars from its competitors.”