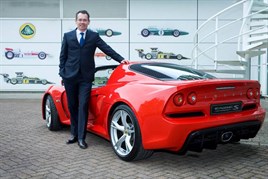 Gales, a Luxembourgian, holds a MSc in management from London's Imperial College, and a MSc in mechanical engineering from the University of Karlsruhe in Germany.

Prior to his appointment at Lotus, Gales was CEO of the European Association of Automotive Suppliers (“CLEPA”) since 2012.

Before joining CLEPA, Gales was the president of automobiles Citroen and Automobiles Peugeot between 2009 and 2012, where he introduced the DS brand in major markets around the world.

Aslam Farikullah, current chief operating officer of Group Lotus plc, remains as member of the board of Lotus Cars.

Lotus has been awarded £10.44 million by the Government’s Regional Growth Fund (RGF) to invest in new products and training. The grant is a further boost on top of a recent £100 million investment by its owners DRB-HICOM.