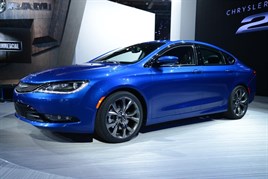 Chrysler will have to increase its global volumes by almost 130% over the next five years to meet Fiat Chrysler Automobile’s (FCA) plans to recover to pre-recessionary levels.

FCA puts Chrysler as the lead brand for North American markets and that is where the majority of its focus will be.

Chrysler will be focussed on improving its relevancy to mass-market America and dominating the people carrier segment. There was no mention of Chrysler’s European or global ambitions within the report to investors beyond talking about increasing global volumes.

There will be a new Grand Voyager in 2016, which will also be available as a plug-in hybrid.

A crossover model (which will also be available as a plug-in hybrid) will follow in 2017.

There will then be a mid-sized crossover and 300C replacement in 2018.

There is no mention of the rebranded Lancia models the Ypsilon and Delta continuing within Chrysler’s future product line-up in the report to investors, but FCA boss Sergio Marchionne has already mentioned axing the products.