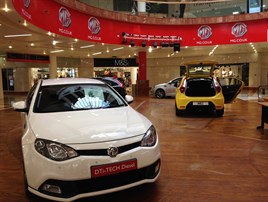 The additional pop up dealerships follow on from the success of the flagship pop up in Westfield Merry Hill, which has now been running for nearly a year.

The expansion to the pop up dealership network follows rapid growth for the automotive manufacturer’s main dealer and aftersales network – with 50 dealers, and 13 after sales centres now appointed within the UK – and MG’s year-long pop-up dealership residency at one of the UK’s most successful shopping centres, Westfield Merry Hill.

All three pop up displays will feature the new MG3 and the MG6; available in both GT fastback and Magnette sports saloon variants.

The displays will allow prospective customers to see the product line in the flesh and to talk to MG sales executives.

The Midland’s based manufacturer has been named the fastest growing automotive brand in the UK by SMMT every month so far in 2014, the marque’s 90th anniversary year.

Success has been due to the recent launch of the MG3 supermini and expansion of the MG6 diesel powertrain family with a new 129g/km diesel recently added.

Price realignments to the MG6 have increased its appeal as all specifications are available from £15,455 to £19,995, and with the current ‘High 5’ offer, MG6 customers can buy and drive away with five years of complete peace of mind.

The growth is set to continue with the aim of 100 retailers expected by the end of 2015.