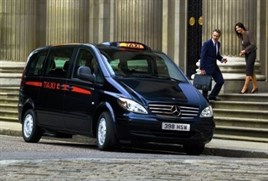 Eco City Vehicles has suspended trading in its shares after warning the stock market its subsidiary One80 is facing administration.

Eco City Vehicles is the sole distributor of the Mercedes-Benz Vito taxi, which uses rear wheel steer technology developed by One80, its 76.6% owned subsidiary.

Production of the Mercedes-Benz Vito taxi has been on hold since August owing to existing stock levels of completed vehicles.

This morning Eco City Vehicles announced that with a lack of production revenues and a pending legal case against One80 by the non-exclusive licence holder, the directors of One80 have notified its shareholders of its intention to appoint an administrator for One80.

"As previously announced the Group continues to experience challenging trading conditions requiring ECV to seek additional funding. ECV is in negotiation with a potential funder that may or may not lead to additional funds," its statement continued.

"With the potential administration of One80 and the resulting contractual frustrations encountered with third parties in executing disposals under the Group's strategic review, together with the continuing challenging trading conditions there is uncertainty as to the Group's financial position and prospects, as a consequence, ECV has requested a suspension of its shares pending further evaluation of its position and future structure."