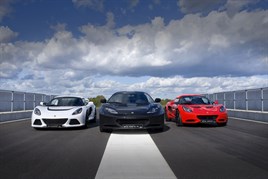 Group Lotus, the British sports car maker, may reduce its workforce by more than a quarter to cut costs.

As many as 325 of the 1,215 people employed by the company, which has its headquarters at Hethel in Norfolk, could lose their jobs as the manufacturer restructures.

The carmaker, which makes the Elise, Evora and Exige cars, said it needs to reshape its organisation to build a “strong sustainable future”.

Compulsory job reductions might be needed, said Lotus, which is owned by Malaysia's DRB-Hicom.

“We have worked very hard to avoid the need to make the proposal, but do believe that it is now essential,” chief executive Jean-Marc Gales said. After the cuts, “Lotus should be a leaner, more competitive organization, focusing on both producing class-leading sports cars and innovative engineering.”

Local MP Richard Bacon told the Eastern Daily Press newspaper he has spoken with Business Secretary Vince Cable and Pensions Secretary Iain Duncan Smith and both had promised the Government would "take every possible step to minimise the effects" of Lotus's announcement.

Mike Hawes, chief executive of the Society of Motor Manufacturers and Traders, said: “This is very disappointing news and we extend our sympathies to the staff and their families potentially affected by this.

"The long-term prospects for the UK automotive sector remain positive, however, with car production set for record volumes in the next few years."