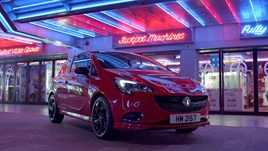 The Vauxhall Corsa has sold over 1.8 million vehicles in its 22 years on the road and, to celebrate, this new campaign is the ‘A to Z of Corsa’ accelerating viewers through a whirlwind of alphabetic themed scenes.

The video illustrates everyday British life following people through their own personal road trips around the UK.

Director of brand marketing Chris Hawken said: “The ‘A to Z of Corsa’ heralds a distinct new look for Vauxhall and offers us the chance to create something that celebrates the energy and fun of Corsa in a nostalgic and distinctly British way. It supports our positioning of, ‘premium design and engineering affordable to all’ and acknowledges the freedom driving brings to all walks of life across the UK.”

The campaign was created by newly appointed agency 101; Founding Partner Laurence Green said: "Vauxhall is a great British car brand waiting to be reborn, and the Corsa is a great place to start our work: a ball of energy, a small car with a big heart which appeals across a wide demographic.  To reflect this, we’ve devised a video scrapbook, an A-Z of Britain which tells a story of what it is like to drive and live in Britain in 2015. It’s a busy, British, young at heart campaign for a busy, British, young at heart brand.”

The original Corsa, dubbed ‘the new supermodel’, was launched in 1993 with an ad featuring Linda Evangelista, Christy Turlington, Naomi Campbell and a teenage Kate Moss.

Check out the new advert here: