BMW may surrender its market leading sales position in Europe to its German premium competitors, its chief executive Norbert Reithofer has admitted.

"We would like to remain the leading premium automaker, also in terms of volume," Reithofer told journalists today at the company's annual results conference in Munich, reports Automotive News Europe.

Audi, he said, is competing with the A1 in a segment BMW is unable to compete in, threatening BMW's number one position.

But if BMW Group included Mini sales the title of being the biggest selling premium automaker will be retained, Reithofer said.

"There are always internal discussions about volume, these tend to end with the conclusion that we cannot surrender market share, but only if you have a good margin contribution. Volume is not everything and maintaining the same level of growth is not everything," Reithofer said.

Audi and Mercedes both aim to overtake BMW in sales by the end of the decade and have been closing the gap in Europe. Audi outsold BMW’s main brand in the first two months of 2015 in Europe, while Mercedes posted the fastest growth rate of the three German luxury-car producers in the period. 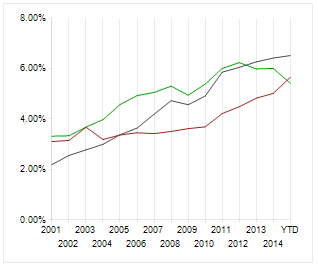