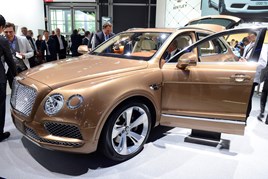 Bentley is expecting its new Bentayga SUV to increase its dealers' sales by up to 50% over the next few years, while the model has a full order bank for its first 12 months of production.

The £160,000 Bentayga (more pictures) will enter production in late November, with some early examples of the car already on a tour of UK dealers.

Bentley registered almost 1,500 cars in the UK in 2014, but is currently running slightly behind that total for the year to date in 2015.

However, with first Bentayga deliveries reaching customers early in 2016, initially with a new 6.0-litre W12 TSI engine, but later with diesel and plug-in hybrid variants, Bentley sales in the UK could comfortably exceed 2,000 units within a few years.

Paul Jones, product line director for Continental and Flying Spur, said: “We’ve confirmed that we expect to grow our volume by 50% over the next few years, and the Bentayga will be an important part of that growth.”

The 608hp 6.0-litre TSI engine is already more fuel efficient in the Bentayga than the 4.0-litre V8 in the Continental GT. But Bentley will also launch a diesel version of the Bentayga late in 2016, expected to be a version of the 4.1-litre V8 engine found in the Porsche Cayenne.

It would be Bentley’s first diesel model and open up the brand to more customers in addition to those who were choosing a Bentley for the first time with the Bentayga W12 TSI.

The SUV uses the same flexible platform as the latest Audi Q7 and just as Audi is about to launch an e-tron plug-in hybrid Q7, Bentley will introduce a Bentayga using a plug-in hybrid powertrain in 2017. This model is expected to offer CO2 emissions substantially below 100g/km.

While some customers had placed deposits on the Bentayga before seeing the car in the metal, Bentley Motors has been hosting dealers with customers who preferred to learn more about the car and view it close up before deciding to buy one, according to a spokesman.

Staff from retailers have also visited headquarters in Crewe for specific training on the new model, which is being touted as a capable 4x4 as well as a practical luxury express. The Bentayga will have a maximum wading depth of 500mm, as well as a towing limit of 3,500kg for braked trailers.

The spokesman added: “We decided that if we were going to produce an SUV it would have to be ‘the Bentley of SUVs’.”