New car registrations in Europe increased by 7.1% in September compared to the same month last year, with 1,495,815 units registered.

This is the strongest September monthly sales result for 10 years for the 29 countries analysed by JATO Dynamics.

This means European sales were the highest since 2008.

The result in September was driven by strong performances in the majority of markets, but particularly Italy, Poland, Belgium, Austria and Spain which recorded increases of 17.4%, 19.8%, 13.7%, 14.9% and 13.4% respectively.

There was double-digit growth in 16 of the 29 markets and falls in only three Ireland, the Netherlands and Greece which recorded decreases of 1.5%, 4.8% and 9.9% respectively. 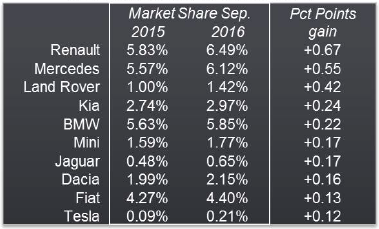 In the segment ranking, SUV registrations exceeded 400,000 units for the first time in the history of European car sales.

The SUV segment’s growth in market share had a knock on effect on the subcompact (B-segment), city-car (A-segment) and MPV segments which all showed negative market share growth.

Renault-Nissan maintained its lead in the SUV segment with a significant 21.7% share and continued to perform well, with volume up by 14%.

Felipe Munoz, global automotive analyst at JATO Dynamics, said: “Following a return to growth in August, September’s results show that the automotive industry is continuing to benefit from a more stable economy and new product launches.

“The industry does face challenges, notably regarding investment considerations as a result of Brexit, but at present it remains buoyant.”

Following on from its market share loss in August, Volkswagen Group continued on a downward trajectory in September, but its losses have stabilized.

Volkswagen and Seat saw growth of 3.5% and 0.6% respectively, but this was enhanced by better results from Porsche, Audi and Skoda growing by 9.6%, 8.7% and 9.9% respectively.

SUVs continued to boost Volkswagen Group’s performance, with the manufacturer’s SUV models growing by 26.5% and accounting for 16.7% of its total sales.

In comparison, its compact cars continued to perform less well, with registrations falling by 4.3%.

The Renault-Nissan Alliance increased its market share, going from 12.4% in September 2015 to 12.9% for the same period this year whilst maintaining its second position in the ranking.

Of the top 10 manufacturers, Renault-Nissan which was most heavily reliant on the SUV segment, with it accounting for 45.4% of the group’s registrations.

In contrast, PSA continued to face challenges, with its volume falling by 5.9% and all of its three brands posting declines.

The group’s losses should be reversed with the imminent launches of new generation key models, such as the Citroen C3 and Peugeot 3008 which have yet to make their mark on the market.

The biggest surprise of the month came from premium manufacturers, BMW and Daimler.

BMW outsold Ford due to a 13% increase in overall volumes compared to the same period last year, and double digit growth from all of its brands.

Daimler similarly posted dramatic growth with its registrations up by 17.8% and it registered the highest market share increase of all manufacturers, with an increase of 0.61%.

Mercedes recorded a 17.8% increase on the same period last year and registered 91,572 vehicles in September which made it the best-selling premium brand in Europe for the month. 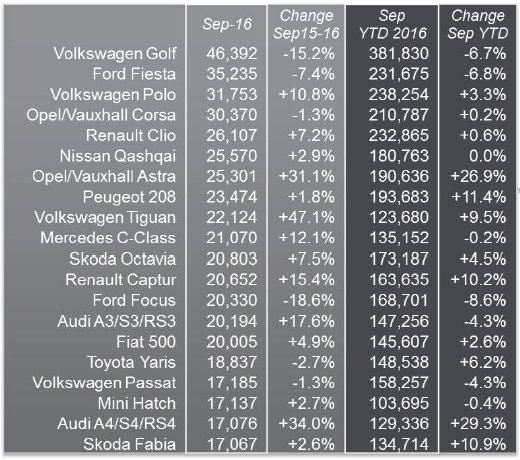 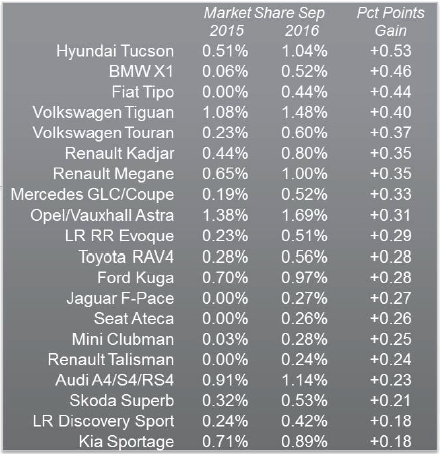 At a model level, the Volkswagen Golf continued to lead the market, registering 46,392 units in September which was enough to make it the best-selling model in the month.

However, this was a 15.2% decline on the same period last year which is the biggest market share drop of the 473 models analysed by JATO Dynamics.

The model faced challenging conditions in significant markets such as France, the UK and Germany where it posted double digit drops.

Despite such losses, the Golf was 21,000 units ahead of its rival the Opel/Vauxhall Astra which posted a 31.1% increase and registered 25,301 vehicles.

Amongst the Golf’s other competitors, the Renault Megane performed well, posting a 65% increase on the same month last year, whilst the Fiat Tipo registered 6,500 units, a strong performance for the model.

In contrast, the Fiesta’s closest rival, the VW Polo posted a 10.8% increase and registered 31,753 units which meant that it outsold the Opel/Vauxhall Corsa.

The Nissan Qashqai maintained its position as the best-selling SUV, despite increased competition in the segment.

However, its volume grew by a moderate 2.9% and in contrast, the Volkswagen Tiguan continued to perform well with it recording a 47.1% increase in comparison to last year, meaning it was only 3,400 units behind the Qashqai.

Munoz said: “With SUVs continuing to dominate the market, this is having an impact on the performance of all manufacturers.

“Competition in this segment is increasing further, with no sign of this changing in 2017 as further SUV launches are set to hit the market.”