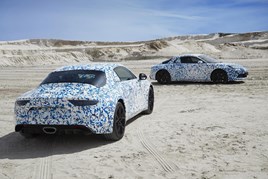 Reservations are being taken on 1,955 numbered Alpine ‘Première Edition’ sports car ahead of its official unveiling in Q1 of 2017.

A special app has been designed to allow potential customers to reserve one of the rear-engined French coupes which are expected to be priced between £46,000 and £50,000 and boast a 4.5 second dash to 62mph.

Officials at Renault as yet unable to name the UK dealerships which will take responsibility for the sale and servicing of the Alpine brand when it arrives next year, however.

Production of the limited-edition version is restricted to 1,955 cars, a reference to the year when Alpine founder Jean Rédélé first established the company.

Alpine’s managing director, Michael van der Sande, said: “Alpines made such a mark because of the elegance of their designs, their nimble handling and their memorable successes in world class motor racing and rallying.

“The interest that the announcement of Alpine’s return has generated across the globe inspired us to give sports car enthusiasts and Alpine fans early opportunity to reserve the new car.”

Reserving the Alpine Première Edition using the bespoke app and making an initial payment of €2,000 (£1,679) will allow customers to select their preferred number – from 1 to 1,955 – depending on availability.

The number will appear on a plaque fixed to the centre console.

Customers will also be able to specify the colour of their car from a choice of three finishes: ‘Bleu Alpine’ (Blue), ‘Noir Profond’ (Black) or ‘Blanc Solaire’ (White).