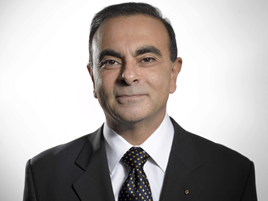 Carlos Ghosn looks set to remain the chairman and chief executive of Groupe Renault, and its alliance with Nissan and Mitsubishi, until 2022.

The board at the carmaker has backed the renewal of Ghosn's contract for another four year term, and will task him with seeing through the 'Drive The Future' strategic plan it announced in 2017.

It comes as Groupe Renault's financial results for 2017 show it increased its operating profits by 500 million euros to total 3.8 billion euros, from revenues of 58.8bn euros.

Ghosn's focus will also be on "steps to make the alliance irreversible" and on strengthening the succession plan at the head of Groupe Renault.

The board's proposal will be voted on at the AGM in June.

“2017 was another record year for Groupe Renault. The commercial and financial results are the outcome of our strategy deployed over the past years and the efforts of all the group’s employees. With this performance, and the implementation of our new strategic plan “Drive The Future”, we are confident in our ability to face the current and future challenges of the automotive industry,” said Ghosn.