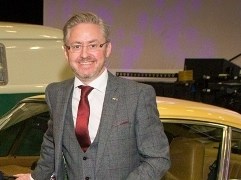 Staff at JCT600 are being tasked with making 2016 the AM100 dealer group’s best year yet, as it celebrates its 70th birthday.

Chief executive John Tordoff (pictured) has told the 2,300 employees at the family-owned group that it will be a year of challenging themselves. The national new car market is not expected to grow significantly and increased supply of used cars is likely to impact on values.

However JCT600’s focus on its people – it has just been listed in the Sunday Times Top 100 Best Companies To Work For for the first time, and celebrated its 84th spot by buying lunch for everyone at its head office and 50 dealerships  – makes Tordoff believe they will play their part.

“The challenge for our colleagues is to make 2016 the best year yet, and I’m really confident we’re going to do that,” Tordoff told AM.

“We think 2016 is going to be a challenge. I think most dealers do. 2015 was one in a lot of respects, we had record registrations but I don’t think anybody is naïve enough to think the dealers all had record sales on the back of that. It was very much a forced market.

However the 10% revenue growth wasn’t matched by net profits, which rose by only 1% due to the impact of high manufacturer targets and major investment in facilities, staff training and systems, including a new website and intranet.

In 2016 the dealer group is investing more than £16 million in its workplaces, including a new Porsche centre in Teeside, redevelopments of Lincoln Audi and refurbishments of its Volkswagen dealerships at Hull, York and Rotherham.

Tordoff added: “The industry has suffered declining margins, costs are going up at a phenomenal rate, and obviously when that happens the return on sales goes down.

“But the challenge is a positive one. It’s not like we’re heading into a recession and need to press the panic button.

"For those retailers who really crack on 2016 will be a phenomenally successful year.”

A month before its Sunday Times Top 100 Best Companies To Work For place was announced, JCT600 held its fifth annual conference, inviting the entire workforce to the First Direct Arena in Leeds.

At the event, staff heard about the company’s successes of 2015, including manufacturer awards and the achievements of individual staff such as those on its ‘Wired’ talent development programme and advanced leadership programme.

“A theme of our business in recent years has been about the pace of change in our industry. It’s absolutely phenomenal and you have to keep reinventing yourself and reinvesting in yourself, because if you don’t you very quickly become dead in the water,” Tordoff said.

The group’s recruitment strategy, led by social media channels, was also credited as helping to reduce the number of extra staff needed and cut the recruitment process to an average of four weeks from the vacancy being marketed.

Tordoff said the annual conference creates an immediate buzz among the staff, and gives the business renewed impetus. It, and the Sunday Times Top 100 Best Companies To Work For process, is an opportunity to get everyone engaged in the business’s family values, and for the leaders of the business to identify the existing strengths and future improvement opportunities.

The group has also become a patrol of the Prince's Trust charity which helps young people.

Watch a video created for the conference here: