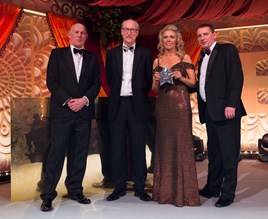 Cox Motor Group celebrated after its Lancaster Honda dealership secured the Japanese brand’s Dealer of the Year award at an annual awards ceremony attended by over 350 people.

Representative from Honda’s 154 full dealership sites travelled to Manchester for this year’s glamorous event, which capped a year in which Honda increased its registrations by 10.65% to 59,106 (2015: 53,417) and celebrated the launch of the 10th generation Civic.

Phil Webb, head of car for Honda (UK), said: “Our Dealer of the Year Awards are an important date in the Honda calendar as they get our network together to celebrate not only the success of individual dealers but the Honda brand as a whole.

“As well as a chance to toast success, the awards are a huge thank you to all our dealers for their continued hard work and contribution to our performance – here’s to the next year.”