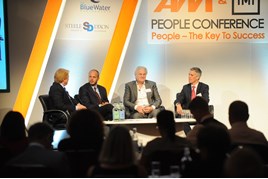 The “tripartite approach” will involve the Institute of the Motor Industry (IMI), the RMI’s National Franchised Dealers Association (NFDA) and will have the full support and endorsement of the Society of Motor Manufacturers and Traders (SMMT).

A permanent team will be responsible for engaging and driving talent in the automotive sector. Its activities will include attending key careers events  (such  as WorldSkills at the NEC), creating its own industry showcase events, and engaging with schools, colleges and universities, as well as parents, to educate them on the career opportunities in the industry.

The team will launch media campaigns and draw on IMI resources already available, such as interactive workshops, careers resources mapped to the national curriculum and more than 150 video profiles of people working in the sector. It will also be able to promote more than 200 regulated qualifications, 20 accreditations and quality assured programmes.

“The initiative will complement and connect the existing activities of individual brands and employers to create a single shop window to our industry,“ said IMI chief executive Steve Nash. “Together we will reach 10 million people through our campaigns, including 200,000 students.”

Nash said the problem currently is that there is no single body representing the sector to graduates and school leavers: “If you leave our store and look at our shopfront, it’s in a back street, it doesn’t have a single shop window and has about 25 doors, so it’s no wonder we struggle when competing for talent.”

The complexity leads to a lack of appreciation of the jobs and career progression opportunities available, he said.

“People think we only employ sales people and technicians.”

Members of a discussion panel came to the conclusion that  the seven-day working week in motor retail was not to blame for the difficulties in attracting young talent and female workers into dealerships.

Diana Mackinnon, who rose through the sales ranks at HR Owen before becoming general manager of Jemca Group’s Lexus Edgware Road in 2007, said she gets applications from women, but only for administration jobs, not sales. However, she is one of three female general managers in the 46-strong Lexus network.

Teenage children still see it as male-dominated and think they need to have an interest in cars, she said.

“Girls only start to consider cars when they’re learning to drive. At that point, their career path is probably already mapped, so I don’t think we’re becoming an option. We need to take it back to a much earlier stage.”

Nash raised the issue of positive discrimination, and said while he worked at BMW it had a graduate scheme that deliberately selected 75% women to rebalance the workforce.

Jane Russell of Russell Automotive Centre, a single-site independent repairer, argued that gender shouldn’t come into it, that it should be the best person for the role.

John O’Hanlon, former chief executive of Ridgeway Group, said Ridgeway had about 20% females in its workforce, which he felt was disappointing. While heading the business, O’Hanlon found it difficult to spread the net to find fresh talent and looked at other ways of recruiting and finding people it didn’t normally get to.

He attended every induction, to express what was really important to Ridgeway. “Management must invest their time,” said O’Hanlon.

The panel said the industry still needs to fight poor perceptions of the industry, both to improve the customer experience and employees’ satisfaction. Mackinnon believes that as long as performance measurement, league tables and targets remain, she doesn’t see how anything will change drastically. “If you took that competitiveness away, the industry could look at its customer service and everything else would fall in line,” she said.

Russell said staff should recognise they are professionals in this industry, and feel proud. Develop them, she said, but it’s important that people are developing themselves too, inside and outside the workplace.

O’Hanlon said for more than a decade he has used the line “customers first, employees firster”. Ridgeway welcomed feedback from its employees, he said, and directors and general managers examined each staff survey in depth, determining action points, and then presenting back to staff what was going to happen.

“It’s got to be that serious. If you’re going to ask the question of your teams, then make sure you take the feedback seriously. And be consistent,” he said.

More flexible working and a benefits structure that promotes a positive work-life balance has to be at the heart of retailers’ thinking as they target improved staff retention.

Steve Le Bas, partner at accountants and business advisers BDO, believes fringe perks and higher basic wages will prove a greater lure to a new breed of staff than the potential of large sales incentives.

He said: “The Millennial wants different things to those of previous generations and the industry is going to have to change to keep up.

“Effective remuneration packages are key to ensuring that leadership goals are achieved.”

The fifth annual BDO salary survey of more than 285 retailers showed that one third of earnings in the industry remain commission-driven, with average remuneration packages increasing 2.5%, from £38,000 in 2014 to £39,000 in 2015.

Le Bas said: “It is always good to see a rise, but for staff wanting to get a mortgage it’s their basic wage that counts.”

He said: “A number of our clients said that they have to give their lowest paid staff a pay rise so they have to deliver that to everybody else. Even when times are good, that represents a large consideration for a business.”

On average, current staff retention in automotive retail stands at seven years – much lower in sales roles – but Le Bas suggested a number of benefits that could leverage an improvement.

Among these were a higher basic wage, like the £25,000 recently guaranteed to new starters by Marshalls, as well as more flexible hours, health packages, childcare vouchers and ‘smart’ pension schemes, which can benefit employers by reducing National Insurance contributions.

Le Bas also warned retailers about their understanding of the new apprenticeship levy.

JCT600 created its Wired programme in 2012, to prepare people in a range of core roles for management.

Katie Saunders, group human resources director, said the programme was part of a permanent ambition to be a “best place to work for”, while creating an environment for success that sees staff enjoy their work and stay with the AM100 group.

She said the process began about six years ago, when JCT600 first participated in The Sunday Times Best 100 Companies To Work For programme.

“Our scores weren’t great, but we did something about it,” she said.

At the time, the company looked externally for nearly every management position and promoted sales people and technicians to management roles without ensuring they could manage and inspire their teams.

JCT600 takes part each year in the newspaper’s survey, seeking feedback from every member of staff. In 2016, it had an 87% response rate.

“It means there’s no getting away from what your staff think,” said Saunders.

“And you need to respond.” In addition, the company carries out another staff survey to “test the temperature”.

As a result of learning employees’ feelings were not wholly positive, the Wired programme was initiated. Currently,  7% of 2,300 staff are on the programme, with a target of 10% by 2018. The promotion rate from the programme is 40% – and it is common for senior JCT600 staff to make Wired programme participants the first option to fill management positions.

Saunders explained that entry to Wired was via nomination only by a line manager and signed off by the head of business or brand director, plus the HR representative for the respective division. Then once on the programme there are core principles to work to: JCT600 doesn’t “spoon-feed” participants: “We provide the tools and support, but it’s down to the individual to drive themselves.”

JCT600 uses a quote by George Bernard Shaw to reinforce this: “The people who get on in this world are the people that get up and look for the circumstances they want and if they can’t find them, they make them.”

On the practical front, the nominated individual has a one-to-one meeting with group talent manager Sarah Aspinall to build a picture of their development areas, focusing on their areas of strength, to maximise and enhance them.

Aspinall will then discuss the findings with the person’s line manager and head of business to share their views. This leads to an individually tailored personal development plan.

JCT600 provides short seminars every few months addressing the needs in the development plan, but much of the emphasis is on on-the-job learning: “There is nothing that can be learned in the classroom that is as effective as sitting in the seat of the person whose position the Wired participant aspires to. We teach skills and then they are practised.”

Saunders stressed the importance of an “overdose of feedback”. “In my experience, it has a massive impact on where they go and how they are viewed in their career.”

She concluded: “Training a group of people who want to progress, tackle their weaknesses and build on their strengths is the most amazing experience, it is like a drug. They add such value – and then they talk about it so the impact is widespread in JCT600.”

All good leaders must first know themselves, realising their own strengths and weaknesses before being able to fully fulfil their own potential, according to Phil Ferrar, director of The People Academy, who has worked alongside coaches to the US Olympic Team and coached BMW managers.

“The ultimate goal is self-management, a point where you can see what you are and modify what you are, turning down the gas in certain situations.”

Ferrar said: “People want to be managed and led differently. Too often we are seeing that managers try to follow a process and the people working under that manager will feel processed as a result.”

Dr Bernd Vogel, associate professor of leadership and organisational behaviour, Henley Business School, warned that there are three negative types of energy, and businesses need to identify which type is most prevalent, and take action to transform it into productive energy.

‘Comfortable energy’ starts with success and profits, but over time the organisation becomes over-confident and a little lazy. Vogel cited Nokia as an example.

‘Resigned inertia’ stems from the over-use of the resources at hand, and from too long implementing too many changes and challenges.

The last, ‘corrosive energy’, is most harmful, because the departments spend their energy fighting and back-stabbing.

Silverstone is one of 39 UTCs in the UK, which is tackling the shortage of engineers. It has industry partnerships with McLaren, Aston Martin and Silverstone.

Patterson said: “I think schools know very well how to do the academic side but they need industry to help them do the rest.”