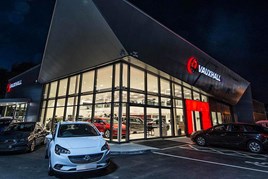 PSA Group plans to cull more than 100 of Vauxhall’s 324 UK retail locations within the next 12 months, franchisees have told AM, which could threaten more than 3,800 motor retail jobs.

The manufacturer, which recently announced that it was seeking to cut 650 jobs at Vauxhall’s Ellesmere Port plant, is trying to increase profitability amid falling demand for Vauxhalls.

Franchisees said they would be forced to make sales, workshop and administrative staff redundant as part of the cull. Based on the AM100 average of 38 staff members per retail outlet, that amounts to more than 3,800 jobs at risk.

“PSA Group has already implemented savage cuts in its manufacturing operations and it looks like that is set to continue in retail. A third of dealerships will go,” said one operator of multiple Vauxhall sites.

The dealer, who asked to remain anonymous, added: “This is action that the brand needs to take quickly to maintain profitability in the network. It will happen within the next 12 months.”

Vauxhall told AM that any reductions in its retail network – currently made up of 324 car sales sites and a further 53 authorised repairers, with 96 sites selling commercial vehicles – would be “part of the normal business cycle”, before insisting that “none are related to the acquisition”.

The statement added: “The Opel/Vauxhall PACE! plan is improving the efficiency of the business in all areas.

“Within the plan, the go-to-market strategy is being carefully reviewed, including the contractual framework with dealers. We have no further comment to make at this stage.”

PSA Group brands suffered stinging volume declines last year, with the SMMT reporting a 16.55% decline in Peugeot sales, a 23.26% decline in Citroën and DS (combined), and a 22% fall for Vauxhall, to 195,137 vehicles.

Vauxhall ended 2017 with its market share at 7.8% – its lowest point this century and a far cry from its 2008 high of 14.02% – as Volkswagen overtook it into second place on the UK best-sellers list.

In February, Vauxhall’s market share fell to 6.01% as it was outsold by Audi and Mercedes-Benz, with the Kia Sportage among the models now outselling its once popular Corsa hatchback. Year-to-date, Vauxhall’s new car registrations are 13.17% behind the same period in 2017, at 17,512.

AM’s dealer source said the declining numbers are having a significant effect on the profitability of a retail network built to handle much higher volumes, which peaked at more than 330,000 in 2007.

“Last year, I think the network ended up at around 0.35% return-on-sales. You cannot sustain that for long. Without the volume there are just too many sites,” he said.

“Whether this is a crisis is a moot point, but either way, many Vauxhall dealers will already be saying ‘enough’s enough’.”

Norman told the Financial Times in mid-January that the Ellesmere Port plant’s fortunes were “inextricably linked” with the strength of Vauxhall’s sales in its home territory.

Norman will be implementing the PACE! recovery plan – devised by Michael Lohscheller, the chief executive of Opel Automobile, and his board – in the UK.

PACE! also targets a return to profitability for the brands, which have failed to make a profit this century, aiming for a 2% operating margin by 2020 and 6% by 2026.

In the UK, the solution looks like it will come in the form of a reduced push for volume – a process driven by retailers’ pre-registration activity and rental deals from the manufacturer – along with a new range of more desirable cars and a reduced number of outlets to take a share of sales.

Andy Barratt, the managing director of Ford UK, told AM in an interview this month (see our interview with Barratt on page 34) that the blue oval’s network now stands at 460 sites, which is a decline of 90 sites over the past five years. Ford   averages 623 sales per retail site.

David Peel, brand director at PSA Group-owned Peugeot UK, told AM last year of actions to improve his network’s profitability (0.85% RoS) by reducing it from 211 sites to 185.

Two-year termination notices were served on 22 Peugeot dealers in Q4 2016, to shrink the network by the end of 2018.

Vauxhall franchisees have already had one meeting with Norman and a more strategic plan is to be discussed in a further meeting in April, one dealer told AM.

He added: “Materially, it is clear that (PSA) have accepted a smaller market share and they are not to push volume to the extent of General Motors.

“If you are stressing the hell out of the franchise and constantly pre-registering, it drives down the value of new vehicles and makes competitive PCPs very hard to develop.

“It’s not a bad move if they can succeed in taking some of the stress out.”

Dealers are already starting to assess which locations may be culled under the plan and suggested that groups capable of aligning Vauxhall with existing PSA Group brand partners on a multi-franchise site may find favour.

“It’s hard to see that if you are just running one Vauxhall site and you’re in a ‘secondary area’ you won’t be very vulnerable,” said another dealer.

However, he added: “If you are a Pendragon, Go Motor Retail, Drive Motor Retail, Eden Group or Peter Vardy then you are likely to benefit from the lesser number of retail sites.”

So far, publicity surrounding PSA Group’s changes to Vauxhall since it acquired it in a £1.9bn deal last April has been confined to concerns about its manufacturing plants.

After talks with Carlos Tavares, the chief executive of PSA Group, Unite general secretary Len McCluskey said “there will be no ‘death by a thousand cuts’ for our plant – Mr Tavares has assured me of such”.

The business secretary, Greg Clark, travelled to Paris for talks with Tavares amid growing fears that the French company would close Ellesmere Port, and Margaret Greenwood, shadow minister for employment, raised the subject on BBC’s Question Time.

However, no mention has been made of the fate of employees at Vauxhall’s UK retail sites and authorised repairers.

The situation again highlights the lack of awareness, on the part of the public and the Government, of the franchised car retail sector, which, according to the National Franchised Dealers Association (NFDA), employs more than 590,000 people in the UK.

AM approached NFDA director Sue Robinson for a comment on the prospect of mass job losses within the Vauxhall network.

“It is imperative that the interests of our sector are safeguarded,” she said.

“The NFDA will continue to actively engage with manufacturers and Government to best represent automotive franchised retailers.

“Dealer members who require support and guidance should contact the NFDA, where we can advise on employment and other business-related issues that may arise.”

The Government still seems more concerned about high-profile manufacturing losses than piecemeal erosion of a network that contributes millions in business taxes.

A spokesman for the Department of Business, Energy and Industrial Strategy said: “As this hasn’t yet been confirmed by PSA – it would be inappropriate for the Government to comment on a commercial matter for the company.”

A spokesman for the SMMT said: “It’s not SMMT policy to comment on commercial decisions/activities of individual members.”

This story has since appeared on: The Times, The Daily Mail, The Independent, The Mirror, Yahoo Finance and London Loves Business