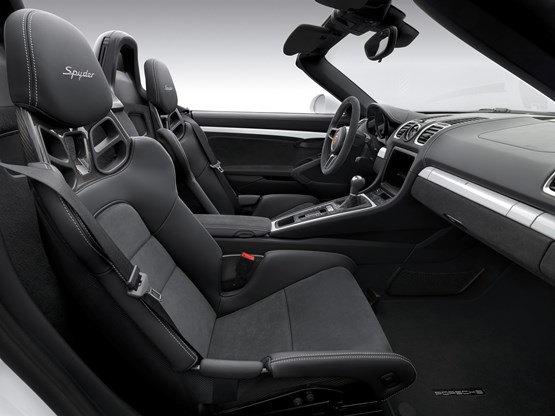 Design elements include, as a tribute to the 718 Spyder from the 1960s, two prominent streamlined bulges that extend down along the long rear lid behind the head restraints. A partially manually operated, lightweight top, and the front and rear end from the Cayman GT4.

The new Boxster’s interior includes light sports bucket seats with large side supports for both the driver and passenger, and a new steering wheel with a diameter of 360mm.

It also features brakes taken from the 911 Carrera.

In an aim to reduce weight, radio and air conditioning are not included as standard. However, both can be ordered ex-factory as optional equipment at no extra cost.

The new Boxster Spyder will be launched on the market in July and is available to order now from Porsche Centres, with prices starting from £60,459.

Check out our image gallery, here.