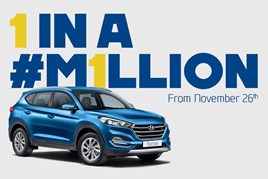 Hyundai Motor Company has celebrated reaching the milestone of one million UK car sales since it began importing vehicles to the UK back in 1982.

The Korean manufacturer, whose first UK import was the Pony hatchback, will mark the achievement by giving away an all-new Tucson SUV as part of the #M1LLION campaign.

Tony Whitehorn, President and CEO of Hyundai UK said: “To have reached a million cars sold in the UK is an amazing achievement for our business and this #M1LLION competition is a way to share this milestone with our loyal customers and social media fans.

“We have been selling cars in the UK for a lot longer than many people think - since 1982 in fact. The last ten years, though, have been the most seminal in our history with more than 600,000 of the one million vehicles sold since 2005 and our market share has more than doubled to 3.5 percent.  This has made us the fastest growing car brand in the UK.

“They say the best advertisement for a car company is to see cars on the road and with that many out there, the future looks good for Hyundai.”

Hyundai’s #M1LLION campaign is now open to entries with people being urged to nominate their “one in a million” person, who they believe deserves to win the brand new car.

The promotion runs for a million seconds from November 26, the equivalent of 11.6 days.