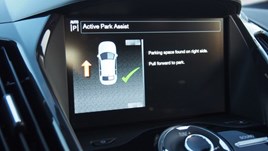 It showed significant increases in the number of cars bught with technologies that help consumers with key driving demands.

“While manufacturers including Ford are working toward autonomous vehicles, our customers are already embracing many of the smart technologies that make driving and parking easier and safer,” said Roelant de Waard, vice president, marketing, sales and service, Ford of Europe.

“We are seeing increasing demand for features that relieve the stresses of driving, and make it more enjoyable – for example, people have very quickly become accustomed to systems that help them to find a suitable parking space and reverse into it.”

The car manufacturer has seen increased take-up of safety systems in its cars over the last year.

These include ‘active park assist’ that uses sensors and the vehicle’s steering system to help drivers identify a suitable space and steer in to it, and was fitted to more than one in three Ford cars in Europe, up from 28% compared with the previous year.

And more than half of new Ford cars in Europe were equipped with some kind of cruise control technology, rising from 48% to 52%.