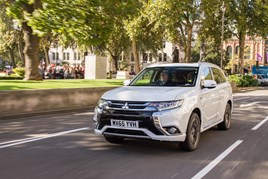 The Government has reduced its grant for electric and hybrid vehicles–  how has this affected consumer demand?

Carwow looks at the impact using consumer selection and configuration of electric vehicles and hybrids on the new car buyers’ website.

Since 2011, the Government has provided a £5,000 grant on the purchase price of every new electric or hybrid vehicle registered in the UK.

However, from March 1 the grant was reduced to £4,500 on fully electric vehicles, and £2,500 on plug-in hybrid vehicles.

But what effect have these changes had on consumer demand?

Carwow has analysed its data, focussing on the Mitsubishi Outlander PHEV (pictured) to find out.

Its conclusion: sales via Carwow spiked in February and plummeted in March. 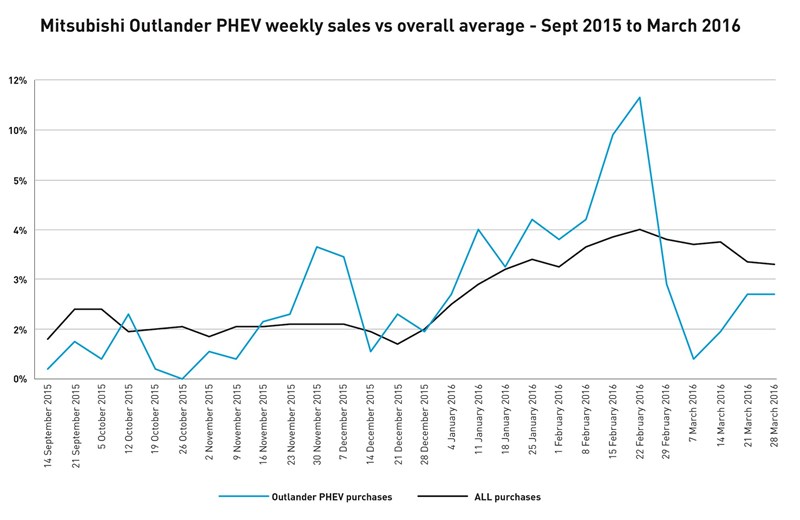 Alex Rose, its head of trading, said: “The results are pretty revealing. In the graph above, we’re comparing weekly Outlander PHEV sales (the blue line) with overall sales on Carwow (the black line.)

“The steady growth in overall sales is partly seasonal (approaching, and into, the March plate change) and partly driven by increased consumer awareness of Carwow.

“However it’s the Outlander PHEV sales pattern that really grabs the attention.

“It’s immediately clear that buyers rushed to buy their Outlander PHEVs before the grant on this model changed from £5,000 to £2,500, as sales on Carwow reached previously unseen levels for this particular model (30 sales in the final week of February), quickly dropping away thereafter.”

There was also an earlier increase in sales, in the second half of November.

“We attribute this to the Government’s autumn statement on November 25, in which no mention was made of the future of the £5,000 grant, but a further announcement was to be expected ‘in due course’.”

It appears this spurred buyers into action, at a time of year in which car sales are typically winding down ahead of Christmas. The reduced grant was then revealed shortly afterwards, on December 14.

“Although we don’t expect the 10% grant reduction for fully-electric vehicles to have a significant sales impact, what’s unclear at this stage is the longer-term effect of what amounts to a £2,500 price increase on the sales of plug-in hybrids, such as the Outlander PHEV, Golf GTE, and Toyota Prius plug-in hybrid.

“With low-emission versions of mainstream diesel cars’ fuel economy creeping ever closer to the magic 100mpg mark, and hybrid vehicles’ real-world fuel economy falling a long way short of their claimed figures, will buyers increasingly decide that pricey hybrid models are not for them?

“March and April’s data so far show only a mild recovery in sales, and manufacturers such as Lexus, Toyota and Mitsubishi will be keeping a close eye on enquiries for these models over the coming weeks and months.”