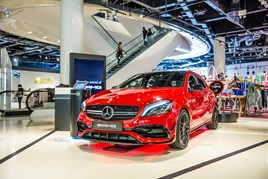 Mercedes-Benz took the UK premium brand crown in 2017 due to gains over competitors in the fleet market.

AM has reviewed fleet and retail detail figures from last year to take a closer look at the UK’s premium market.

It also helped to offset the drop in C-Class fleet sales which saw a 6.15% drop (but still represented the second biggest chunk of Mercedes’ fleet registrations at 25,563 units).

The biggest growth segment for Mercedes-Benz was its G/GLE/GLC Class products, up 45.3% in the fleet market to 10,136 units.

Its fleet performance also meant the brand made it into the top 10 volume sellers for 2017 in the UK with the C-Class and A-Class both on that list.

Audi saw its biggest fleet loss from a fall in A6 registrations, down 26.68% to 8,204 units and the A1, down 12.3% to 8,492 units. The A1 is an important conquest vehicle for Audi and for many, their first way into the brand, so the new generation model due to arrive this year will be vital for fleet and retail volumes.

The Q2 delivered big retail growth for Audi, with a full year of sales in 2017 propping up this side of the business with an additional 8,843 units.

A5/S5 registrations also increased with retail customers, up 48% to 5,980 units.

While the big three German manufacturers are playing around the 180,000 unit volume mark, there is still a wide gulf between the rest of the premium players in the UK.

Land Rover was second to Mercedes last year in terms of a volume growth spurt, growing the brand by almost 4% in total. Retail was the biggest growth area, up 5.21% to 48,329 units, but Land Rover also increased its fleet volumes by 2.16% to 34,324 units.

While AM does not have access to the model breakdown from Land Rover, it’s clear almost a full year of new Discovery sales would have been beneficial to the registrations success.

Volvo really cemented its position in the premium market with its new XC90 back in 2014. While registrations were flat in 2017, down slightly by 1.19% to 46,139 units, Volvo has ambitions to increase sales to 60,000 units over the next two years.

The XC40 crossover is expected to help push Volvo towards its goal of a 2% market share by 2020, but last year it was big gains in the retail market that held up the brand from a negative performance.

Volvo’s retail fortunes were boosted heavily by the new S90 saloon which saw registrations increase from 268 from the previous S80 model to 1,723 units to the new generation.

Audi lost share in almost every segment of the retail premium car market in 2017, as it failed to defend against a Mercedes-Benz onslaught and strong activity from BMW.

Audi’s A3/S3 range lost 4ppts share and lost the lead of the compact executive car segment, where it had accounted for one in four sales in 2016.

It was knocked into second place by the BMW 1 Series, whose segment share rose 5.9ppts to 20.9%. Mercedes-Benz A-Class dropped 1.5ppts in retail share, however grew significantly in fleet to more than compensate.

Mercedes’ flagship S-Class has led the large executive car market for many years, but in the retail market in 2017 the Porsche Panamera ate into its lead. S-Class share dropped 15ppts to 34.3%, while Panamera gained 21ppts to record a 26.5% share, overtaking BMW’s 7 Series (23.5%) in the process and leaving Audi’s A8/S8 far behind with 5.2%.

The SUV market was where Audi fought hardest. Its new Q2 took the lead of the small premium SUV retail market, rocketing to 18.9% share and leaving the Mini Countryman in second place with 13.1%. And in the compact premium SUV class, Audi’s Q3 gained 3.5ppts to secure a 26.5% retail share, narrowing the gap to the segment-leading Range Rover Evoque’s 39.5%.