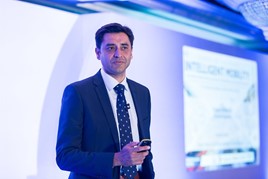 A ‘no deal’ Brexit will see car registrations volumes slip back top levels last seen in the 2009 recession, algorithms created by Frost & Sullivan have determined.

Calculations run by the consultancy group suggest that UK vehicle production will fall back from around 1.48 million units in 2018 to 1.17 next year as part of a Brexit-triggered trend exacerbated by a reduction in automotive sector investment – from a high of £2.5 billion in 2015 – to £0.44bn in 2019 in a ‘no deal’ scenario.

“What we have found that new car sales volumes will decline whatever the outcome of negotiations, but a hard Brexit would see registrations fall back towards levels last seen in 2009,” said Singh. 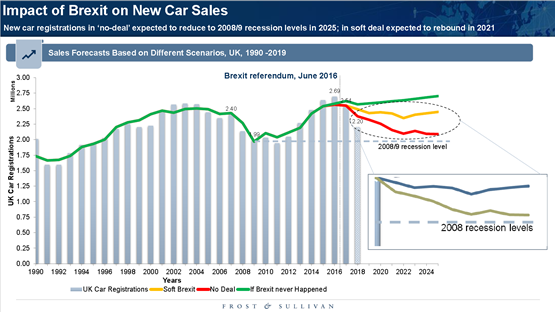 Singh said that a number of impact mitigation strategies have seen manufacturers stockpiling vehicles and parts in storage facilities at each side of the border, adding: “Manufacturers will also be looking to different ports to bring vehicles into the UK because Dover, in particular, is expected to become extremely congested.”

Frost & Sullivan said that its seminar had delivered a “lively debate” on the impact of Brexit on the UK economy and industry at its Chiswick Park offices.

Representatives from Jaguar Land Rover, AstraZeneca and Nomura were among those who took part in a straw poll which revealed that all attendees expected the EU and UK would agree to a deal ahead of the looming Brexit deadline on March 29.

“The details of that deal are pure speculation, but it was agreed that the UK government should take Brexit as an opportunity to leverage its core strengths of world-class R&D, technological expertise, a flexible labour market and its strategic location linking East and West to create new industries which will meet the needs of tomorrow,” said Gary Jeffery, senior partner at Frost & Sullivan.

Amid the gloom, Frost & Sullivan’s event also focused on the potential growth opportunities to exploit in the wake of Brexit.

While EU immigration to the UK is set to dip as the free movement of people ends, companies could tap into a larger non-EU skilled labour pool to meet staffing needs with a possible relaxation of Tier 2 visa caps, said Neha Anna Thomas, Emerging Market Innovation Team Leader at Frost & Sullivan.

With lingering uncertainties concerning post-Brexit conditions, Frost & Sullivan’s experts agree that mitigation strategies to limit disruption are the need of the hour.

Among the steps being taken by corporates  are stockpiling to limit disruptions arising from potential tariffs and customs checks, as well as supply chain review and restructuring.

Industry should have greater clarity on the likelihood of a deal or no-deal scenario ahead of the December EU Summit, the last chance to strike a deal.

The UK and the EU failed to finalise a deal during the October Summit, with the likelihood of a special November Summit now appearing to be weaker.

The Society of Motor Manufacturers and Traders (SMMT) has already expressed concerns that a no deal Brexit will add £1,500 to the cost of the average car sold in the UK as World Trade Organisation (WTO) tariffs of 10% are imposed on imports.

But, speaking to AM after the October 9 seminar, Singh said that it was impossible to foresee a scenario where car manufacturer would expect their franchised partners to bear the impact of the £1,500 WTO tariff if Britain left the EU without a deal in March, however.

He said: “With the margins made in the sector, I do not see how that could be expected of them.”