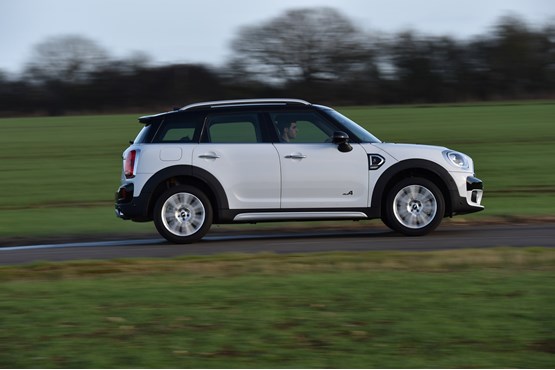 Mini has gone supersize with the new Countryman – it’s the biggest model in the brand’s 57-year history.

And useful new features include electric tailgate control with touch-free opening and unique options, including a fold down picnic bench at the rear.

For the first time Mini is offering a plug-in hybrid model - the Cooper S E Countryman ALL4.

Drawing from expertise gleaned from across the BMW Group, this new hybrid features a turbocharged petrol engine and an electric motor, reducing fuel consumption to 134.5 mpg yet also enabling a 0-62 mph time of 6.9 seconds.

The rest of the new Mini Countryman line-up is powered by an all-new range of engines sourced from the latest Mini TwinPower Turbo generation.

The new Mini Countryman is available with both manual and Steptronic gearboxes and with front- and all-wheel drive.

Equipment levels have been improved compared to the outgoing model.

There is broad scope for owners to personalise their new Countryman, with extensive colour and trim options, advanced technology features and a range of option packs that offer carefully selected items with significant cost savings for the customer.

One option is a new 8.8-inch touchscreen display as part of the Mini Navigation System XL, offering touchscreen multimedia and navigation control for the first time in a Mini.

The Countryman is available to order with prices starting at £22,465 for the Cooper Countryman.

First UK deliveries will be in February. Prices for the plug-in hybrid model will be announced later.

AM Poll
What is your take on the car retail sector's ongoing vehicle supply shortages? Please leave a comment
Vote
View all
3605