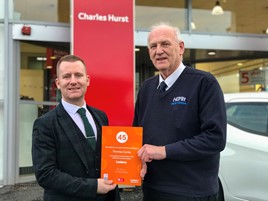 Lookers has presented an award marking 45 years of service from George Currie in its Northern Ireland Charles Hurst dealerships.

Delivering parts by bus and train is among Currie's early memories of starting as a parts advisor in 1975 at Belfast's Neville Johnston's Toyota dealership, which was acquired by Charles Hurst in 1990.

That was after he'd returned to Belfast from Australia when his father fell ill, leaving his possessions behind. The temporary visit became longer-term, when Currie was asked to be best man at a wedding, so Currie went for the parts job, got it and stayed..

Over the decades, Currie has gone from supporting a team with one delivery van to being part of an operation with a fleet of 16 vehicles.