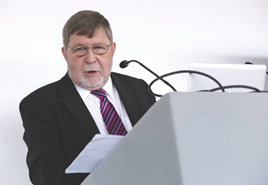 The car retail sector has paid tribute to Lawgistics founder David Combes following his death this week at the age of 72.

An announcement on the legal advice providers’ website announced that it was “with deep sadness” that it announced the passing of the company founder and managing director.

AM understands that Combes died on July 13 following a lengthy battle with ill health.

The statement issued by Lawgistics yesterday (July 15) said: “For more than 50 years David has championed the cause of the motor trade in legal and compliance matters, first creating Lawdata then over the last eighteen years developing Lawgistics into the success it is today.

“All at Lawgistics are of course bereft but will continue to follow his ethos of providing friendly legal support and advice to our members.”

It added: “David will be sorely missed but he leaves a legacy in his knowledge, wisdom, client focussed service and commitment to all who relied upon him and his team.”

Combes was married to wife Susanna and his son, Joel, is Lawgistics’ sales and marketing manager.

One car retailer referred to Combes as an “industry legend” in tributes paid following news of his death.

Others took to social media to share their sentiments.

Nick Horton, the founder of automotive training provider Profitbox, said: “A true expert in his field, a true gentleman and a true automotive ambassador. The industry has lost the doyen of automotive law. RIP David.”

Keron Hurlstone, business development manager for warranty provider WMS Group, said: “The Automotive Industry says goodbye to a great man. The legacy lives on with his son Joel and the great job of supporting retailers with legal and compliance challenges.”

A statement issued by the Independent Motor Dealers Association (IMDA) said that members were “sorry to hear the sad news” of Combes’ death. It added: “Our thoughts are with all the family.”