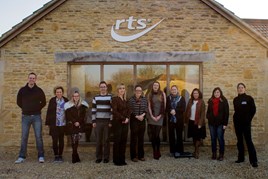 Automotive learning and development agency RTS Group has moved its team to larger offices in order to accommodate future growth.

RTS Group, based in Wiltshire, has relocated from its headquarters in central Chippenham to a new suite of offices on the outskirts of the town which features a dedicated eLearning iPad set up station area and a bigger film studio.

Managing director Malcolm Miller said: “We had outgrown our premises and for some time had been looking for a new location which better reflects our brand as a modern, global company, and also gives us the room we need to expand.

“The world of learning has moved on and in addition to traditional classroom learning we use state-of-the art technology, including 3D animation and augmented reality, so it was important for us to find a new location which would give us superior facilities to produce digital learning and development programmes.”

RTS Group was set up in 1989 and has grown to a team of more than 40 in the head office, with over 200 associates around the Globe.

It supports automotive manufacturers and dealers to develop their frontline staff – including dealer principals, sales, parts and service personnel – to become more effective, particularly in their use of new technology.

RTS Group trades in the UK and extensively overseas, including Europe, China, the Middle East, and Africa, counting Mercedes-Benz, Mazda and Nissan among its clients.

It also has a highly successful finance arm, FIMTRAC, which supports dealerships to increase the take-up among customers of point of sale finance.