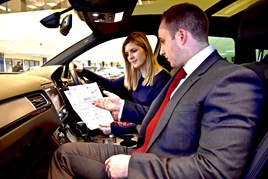 The RAC is preparing to offer the motor trade market history checks for a £1 in an attempt claim a share of a market it believes is worth up to £25 million a year.

Taking on existing services including HPI, Experian and CDL, the RAC Car Passport will launch on February 26 with an introductory offer that allows checks to be completed for £1 until the end of March.

RAC managing director of Motoring Services, Robert Diamond, said that the prices undercut key rivals by around 50% but added that “outstanding customer recognition and the credibility of the RAC brand” would be key to the new product’s success.

Diamond said: “The RAC has so far been known as a consumer brand so this is a significant branch out for us into a market where we know we can cause major disruption.

“We have taken what we have learned while operating this service for a consumer audience for more than a year and developed it specifically for dealers, with a new web-site and a number of new functions that will add value to what is already offered in the market.”

Key features include customer-facing, downloadable RAC Car Passport documentation designed to maximise the credibility of the check, £10,000 of insurance that can be increased to up to £50,000 to protect higher value vehicles, and a mileage adjusted valuation that can be upgraded to a Glass’s valuation for an additional cost.

A 30-day search refresh also eliminates the risk of dealers incurring costs for history checks of the same vehicle within a short time-frame.

Diamond said: “An RAC Car Passport check has a genuine value to the consumer as part of the car sale, we believe. It is something that adds a high degree of trust.”

He added: “This is a market that has suffered from a lack of competition for some time and, we believe, dealers have been paying too much for used car history checks as a result.

“RAC Car Passport for dealers marks a departure. It uses exactly the same data sources as other provenance checks and is effectively identical in specification but offers a much lower cost and the high level of credibility of the RAC name.”

The RAC estimates that around 15 million history checks are made each year in the UK and it hopes to capture around 5% of that market in 2016, rising to 10% in 2017.

AM Poll
What is your take on the car retail sector's ongoing vehicle supply shortages? Please leave a comment
Vote
View all
4094