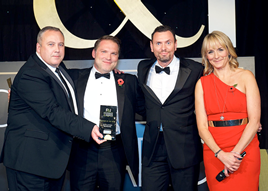 Evolution Funding has been named F&I Conference & Awards 2016 ‘Broker of the Year’ for the second consecutive year.

The conference and awards, hosted by Wakefield-based DealTrak at The Royal Armouries in Leeds, are now in their sixth year and featured a day of debate and discussion followed by an evening of recognition for the best performers in the industry.

Evolution’s Broker of the Year Awards is the result of nominations from motor dealers and evidence of how their broker partner had consistently proven to be a trusted and valuable addition to their F&I offering.

Evolution Funding’s chief executive, Jeremy Levine, said: “Our business is driven by our dealer partners and we work hard to build and deliver on those partnerships. It is fantastic that our dealers value us highly enough to nominate us for a prestigious, industry-recognised award.

“We’re a company that never stands still and we’re committed to helping our dealer partners embrace the opportunities that future developments in finance and digital present.”

The award rounds off another successful year of recognition for Evolution Funding which saw them named ‘Motor Finance Intermediary of the Year 2016’, listed in the Investec Mid-Market 100, identified as one of London Stock Exchange’s ‘1000 Companies to Inspire Britain’ and named in the Top 50 Fastest Growing Tech Companies at the Northern Tech Awards 2016.