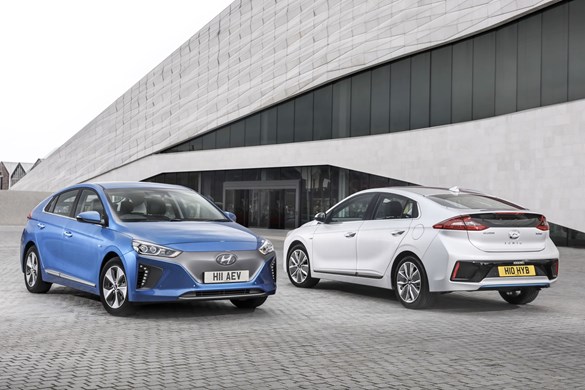 After once focusing all its alternative fuel vehicle (AFV) attentions on its hydrogen-powered ix35 SUV, Hyundai has taken strides with the Ioniq hatchback.

Introducing electric, hybrid and plug-in hybrid (from Q2 2017) versions to the Korean brand’s line-up, the Ioniq will be the first car offered with a choice of three AFV drivetrains.

At the UK launch of the new model, Hyundai UK’s president and CEO, Tony Whitehorn, said he was eager to see how successful it would be, during “interesting” times that saw consumers looking for alternatives to petrol and diesel power.

“If they’re going down the hybrid route, then the switch from an internal combustion engine is a much more straightforward switch now,” he said. “The Ioniq hybrid is geared towards feeling as familiar and straightforward as possible.

“People no longer drive these kinds of cars because they are seen as ‘eco-warriors’. It has become a lifestyle choice, and ‘dieselgate’ has played its part in that.”

Whitehorn said he expected the electric and hybrid models would be split 50:50 between fleet and retail customers.

Hyundai senior product manager, Sylvie Childs, said the hybrid would account for an estimated 63% of all sales, followed by the electric (24%) and plug-in (13%).

The electric Ioniq’s 28kWh polymer battery not only delivers 120PS and 295Nm of torque, but its 7% benefit-in-kind (BIK) tax band results in a monthly tax bill of less than £40 for a business user in the 20% income tax band. The 141PS/265Nm hybrid has a 15% BIK figure linked to its 79g/km CO2 emissions. The hybrid also claims fuel efficiency of 83.1 mpg.

Hyundai claims the plug-in hybrid will do 31 miles on electric power, which helps to lower its CO2 emissions to 32g/km, also placing it in the 7% BIK band.

Among the standard kit on the hybrid SE are 15-inch alloys, DAB radio, Bluetooth, adaptive cruise control and rear parking sensors with a rear-view camera.

The electric Ioniq is only available in Premium and Premium SE (£30,740 without the EV grant).

All versions of the Ioniq come with Hyundai’s five-year unlimited mileage warranty on the vehicle and eight years and 125,000 miles on the high-voltage battery.

Any of Hyundai’s 157 franchised dealerships can sell the full range of Ioniq vehicles, providing they install a charger through supplier partner Pod Point.

Technicians across the network have been trained to offer the Ioniq’s three-year service plan, which delivers a service each year or 10,000 miles, for £349.

Unlike the quirky Toyota Prius, the Ioniq is conventional in its styling, defined by its falling roofline, which is central to its class-leading aerodynamics.

The electric version is defined by its blanked-off plastic front grille and copper-coloured highlights to its lower bumper and elements of interior trim including the air vent surrounds. The hybrid wears a choice of silver or blue.

In the front, interior space is on par with the likes of a Ford Focus, although rear headroom is more restrictive.

The hybrid’s 433-litre boot falls to 350 litres in the electric version due to the battery beneath its rear seats.

Both the EV and the hybrid feel conventional and familiar, with no unusual contact points and keyless entry and push-button starting on Premium grades.

There is even the option to change gear with the steering wheel-mounted shifters of the hybrid’s dual-clutch gearbox.

On a largely Welsh test route, the hybrid Ioniq gave a comfortable ride and fuel efficiency of just under 60mpg.

The EV felt like the more remarkable car during a near-140-mile drive into the Welsh countryside, though.

Both quicker (a 9.9-second dash to 62mph against 10.8 in the hybrid) and quieter, the electric claims a range of 174 miles. From the test drive, it appeared that well over 100 miles should be easily achievable on a single charge.

Hyundai claims the battery can be charged to 88% in just 33 minutes at a rapid charge point, or to full in four to six hours at a conventional fast-charger or 10 to 12 hours on a three-point plug.

Overall, I was left with a sense that Hyundai might have hit on something with the Ioniq. Just as the brand delivered choice to its customers by pioneering the Rockar store sales and marketing model at Westfield and Bluewater shopping centres, it is again offering choice where it did not exist.

Whitehorn is as pragmatic about the Ioniq’s sales potential as he is about that of the Rockar project (which he estimates at 1,600 to 1,700 cars a year).

“I think, for the dealer network, it’s a great opportunity. There’s not many competitors and it’s not the sort of thing that other manufacturers can offer.

“For some time, this has been the domain of Toyota and now we have entered the game and actually taken a leap ahead of them.”