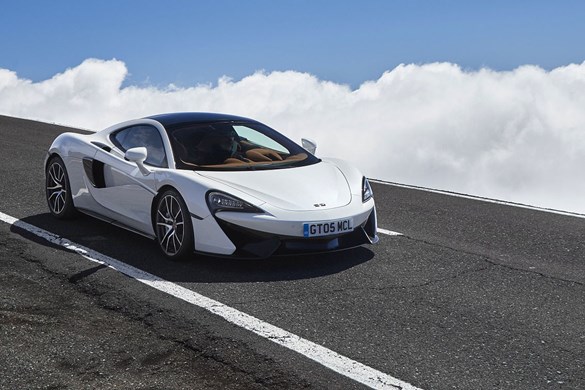 Wherever McLaren Automotive moves, it moves at speed and its Sports Series is about to usher in a period of growth that it says will see production grow from about 1,400 cars a year to more than 4,000.

Billed as an “everyday driver”, the £154,000 570GT is its most luxurious, refined and comfortable sports car yet, according to McLaren.

Unveiled at the Geneva Motor Show in March and now officially heading into the UK’s five McLaren Automotive showrooms (soon to be six, with the imminent opening of Rybrook Holdings’ facility at Bristol’s Cribbs Causeway), the Surrey-based brand’s latest creation could be its most important yet.

Geoff Grose, McLaren Automotive head of vehicle development, said the five-year-old manufacturer, which is poised to announce a third consecutive year of profitability, has high hopes for the new model.

Managing demand for the product is already a key priority, with a seven-month lead time for customers and impressive performance expected within the increasingly important McLaren Qualified approved used programme. Residual values for the 570GT (3yr/30,000 miles) are expected to be on par with the 570S’s 63% – some 18% better than a Porsche 911 Turbo S.

Grose said: “Our 80 retailers will soon be receiving their allocation of a showroom car and a demonstrator and the challenge for them will perhaps be persuading customers that they can’t have those cars and have to wait.

“McLaren is intent on maintaining its exclusivity, so we will never produce more than around 4,500 cars a year and that will make the job of managing lead times quite difficult.”

Although the 570GT is intended for everyday driving, it still takes its performance credentials very seriously – it can accelerate to 62mph in a searing 3.4 seconds and on to a 204mph top speed. It is fitted with a 3.8-litre twin-turbocharged V8, delivering 564bhp and 443lb-ft of torque.

Fuel efficiency claims of 26.6mpg on the combined cycle and CO2 emissions of 249g/km do not scream practicality, but with a design fundamentally changed from that of the more performance-focused £147,000 570S, the 570GT has introduced a side-opening rear glass hatch, underneath which lies a 220-litre luggage space. In addition to the 150 litres of space available under the bonnet, the result is a load space equivalent to that found in a BMW 1-Series.

A panoramic glass roof continues the theme set by that glass rear hatch, allowing light to flood into a leather-wrapped interior. This features prominent areas of the carbon-fibre trim that defines the look of many McLaren products, but the interior of the 570GT is more plush than anything found elsewhere in the comparatively pared back and driver-focused Sports Series range.

The glass roof uses McLaren’s Sound and Solar Film to cut down glare and deaden noise. McLaren has also worked with Pirelli to develop a set of P Zero tyres, which incorporate the French brand’s patented Pirelli Noise Cancelling technology to deliver a more refined ride.

The carbon-fibre tub that forms the lightweight (just 75kg)  and rigid core of all McLaren Automotive products has been modified to be both lower and narrower at the front end of the door sill to allow easier access and the trademark dihedral doors now open more vertically, bringing improved access in tight parking spaces.

One area where retailers will be keen to see developments is in the McLaren Special Operations (MSO) division headed by executive director Paul Mackenzie.

Mackenzie told AM that MSO is becoming more and more involved in the early development of cars to come up with a range of personalised options.

He said: “The MSO products represent a huge and growing opportunity for retailers. We have seen that many are making great profits by really embracing the concept, while others are more apprehensive, but the benefits for them are obvious.

“Many of the bespoke parts on the newer cars have been redesigned to allow them to be fitted by the retailer and that’s all part of the move we need to make as volumes grow and retailers gain the ability to realise greater profits.”

While desirable options will benefit dealers, the 570GT’s design, by chief designer Robert Melville, is described by the Yorkshireman as McLaren’s most “classically graceful”.

A rear spoiler – 10mm taller than the 570S – helps to reduce lift at speed and huge air intakes down each flank aid cooling on the turbocharged V8.

On the road, the 570GT – riding on conventional springs with damping some 15% softer than the 570S – provides a supple ride. At motorway speeds, a degree of roll can even become apparent.

The ability to affect both handling and drivetrain via two dials on the centre console means the driver can tune the car through Normal, Sport and Track settings.

In Normal, the car is relaxed and remarkably refined, albeit still hugely fast when called upon.

Sport tightens the ride up and sharpens the gear shifts of the seven-speed automatic gearbox which can be operated manually via a pair of F1-style, steering-wheel paddles.

Whip-crack gear-changes and surging acceleration is a given in this supercar-quick slice of advanced British engineering.

The combination of performance and finesse is expected to see the 570GT account for 40% of all sales generated from the three-model Sports Series range made up by the 540C (£126,000), 570S and 570GT, which itself is anticipated to account for two thirds of all McLaren sales in the coming 12 months.

McLaren Automotive powertrain director, Richard Farquhar, said: “The reaction to the 570GT has been amazing.

“Everyone in the business has to step back and realise what we are all part of at the moment. From the designers to the engineers and the production teams and retailers: we are building what will hopefully be a truly iconic brand for decades to come.”

What your customers will read about the McLaren 570GT

Top Gear
The GT is elegant and understated. But there’s nothing understated about the way it lights your fire when you point it down a cursive road.

The Telegraph
The 570GT proves that by dialling back on the numbers, McLaren is learning to make a great road car as well as a track car.

EVO
It may be the most refined, luxurious and ‘long-trip’ McLaren ever made – but its DNA is still laced with sports car genes.